Apparently nobody showed up for Ezra's Freedom Weekend.  You can deduce this from the fact that when you  google "Ezra Levant" and "Freedom Weekend" you get basically nothing.  Not a single news story, blog-post, tweet, twit-pic...nothing.  The gang at FreeD bowed out; the Shaidle's were busy waving placards in front of a mosque somewhere; Dr. Roy apparently went to the opera.
And if you watch some Sun TV clips on youtube these days you will find they can ramble on for 15 or 20 minutes without a single advertiser interrupting to to hawk their wares.  Not Dr. Ho with his inserts, not the silver merchant that paints himself silver, not nobody.  Maybe these guys decided they're too classy for Fox News North.

So, when there's no dough coming in, what do you do? 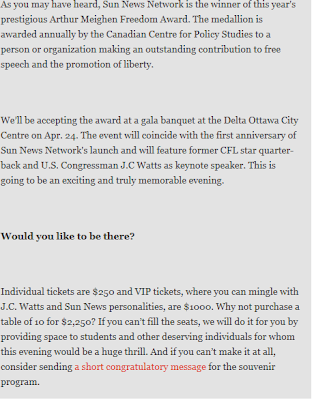 You try something that didn't work the first time.

Now, I'm willing to link to the Maple Leaf Dinner sign-up page because I know you won't sign-up.  Either will anyone else.  Pay a $1,000 to sit between Ezra and Adler?  Sounds like a good evening to spend playing mini-golf with the guys from the office instead.
By the way the Canadian Centre for Policy Studies is these people.

Posted by bigcitylib at 6:28 AM

Canadian Centre for Policy Alternatives are on our side and are not 'these people.'

Just out of curiosity, which Canadian Centre came first?