Not really something worth doing, because its only The Sun, but since it won't take very long...

In his commentary on the much ballyhooed David Rose story in the weekend Daily Mail (UK), Goldstein writes:

One problem with determining whether the Earth is warming is that it’s hard to measure.

The Met says 1998 was the warmest year on record, meaning in the past 132 years for which reliable temperature data exist.

Interpreting temperature trends obviously depends on what years you choose.

Well, no, in their response to the Daily Mail story, which Goldstein actually references but perhaps did not read, The Met provided this graphic (which, in addition to being informative, is really quite pretty): 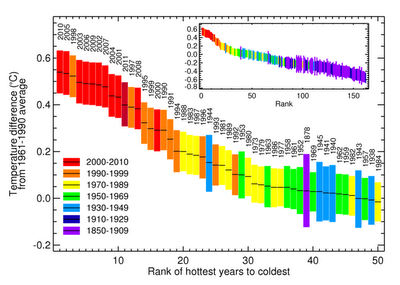 Not only does it show that eight of the ten hottest years were recorded in the last decade, it shows both 2010 and 2005 as being hotter than 1998.  Who knows how Goldstein managed to bung this one up?  It is true enough, though, that the ranking for the various years can change retroactively as more data becomes available.  Nevertheless, since March of this year, all the relevant sources, including The Met, have shown 2010 and 2005 as being warmer than 1998.  Perhaps Goldstein has simply not kept up.

PS. As for Mr. Rose, the guy has a long history of misquoting scientists.

Did you mean Lorrie Goldstein, not Gunter?