The decision can be found here. Warman's comments can be found  here, and I will write something up that's a bit more substantial when I read the entire 72 page decision.  But essentially, the decision accepted the pro-CHRC arguments as summarized below:

As to the presentations, they generally went according to plan, with the pro-HRC side arguing that all that should be on the table is the  severing of Section 13's penalty provisions.  But there were a few interesting twists, or at least arguments I haven't heard before.  The young gal from the African Canadian Legal clinic (Moya Teklu) argued that there has been so little analysis of the CHRC's actual behavior that it would have been impossible for Athanasios D. Hadjis (the tribunal chair that had ruled for Lemire last go-round) to know whether this behavior had changed over time--and thus whether it had become less conciliatory, more litigious. She also has a tattoo on the back of her neck, so they clearly aren't barriers to success anymore.   Richard Warman argued from the transcripts of the earlier hearing that in fact he had been open to the possibility of settling with Lemire, contra Hadjis' opinion.

1) Some weight seems to have been given to Ms. Teklu's argument noted above.

2) Judge Mosely rejected Lemire's argument that somehow the Internet "changed the  rules" when it comes to hate speech.  From the decision: 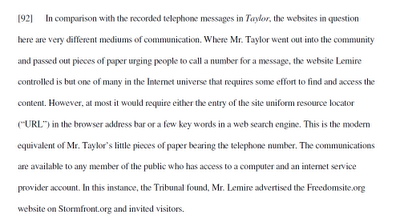 ...which, by analogy, probably bodes ill for anyone trying to make an analogous argument in cases of alleged on-line defamation.

3) Judge Mosely rejected the notion that S13 definitions of hate speech were too vague to be workable.

5) Judge Mosely basically exonerated the HRC and Warman, As Richard himself puts it:

2) Repeated efforts were made by the Commission and Richard Warman to engage Marc Lemire in mediation or negotiation but these were always refused by Lemire because he would not accept a cease and desist order as part of any settlement. (para 60)

Now, Bill C-304 repealing S13 is wending its way through the Senate, but Lemire is apparently not off the hook.  He faces a return to the tribunal and a permanent cease and desist order.  Furthermore, whatever its fate with the Harper Tories, Mosely's decision will mean that a future government will have justification for reinstating the section or something close to it.  And by that time most of the MSM opinionizers who were willing to carry Lemire's water for him last go-round will be unemployed and in a soup line.

Wow. What a waste of time.

Unknown said...
This comment has been removed by a blog administrator.
10:47 PM

I don't think it has ever been seriously argued that a defamatory statement loses its character simply by being online as opposed to being in print.

Really Meir, there was a time when you opposed neo-nazis like Marc Lemire rather than coddle them.

This Marc Lemire is a nothing. I pay more attention to Zaynad Khadr because she is friends with Ian Macdonald and posted a pro Hitler article on her facebook page. The combination of Al Queda and Nazi ideology is a clear and present threat.