CRU Hacked From The Eastern U.S.?

This comment appeared on Hans Von Storch's Climate Onion blog (yeah he called it that):

Particularly interesting is the remark about the numeric IDs which identify the emails in the zipfile. The headers of the emails contain the date and time on which they were sent. If I understand the comment correctly, the numeric IDs are Unix timestamps for those sending times, but moved by 4 or 5 hours from UK to eastern US time. This suggests that the emails were given their current identifiers on a computer in North America, or one that was running on North American time - which in turn suggests a hack rather than a leak.


It references a rather more in-depth discussion at Climate Audit, of which the most pertinant comment seems to be: 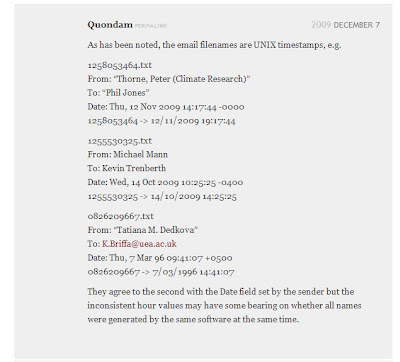 Which would indicate that the hack was indeed a hack and not a leak.

PS. Or, as TiGuy points out, they might have gone through a computer in Eastern Canada.

How ever it got into the public domain, it is having an effect:

The poll, commissioned by the Frontier Centre for Public Policy, suggests that 72% of Canadians are against an immediate commitment -- 57% think government should postpone signing a treaty and 15% say they should not sign one at all

A think tank poll, worth exactly $0.

A think tank poll, worth exactly $0.

Oh, I'm sure a good deal more than $0 went into commissioning that particular poll!

Ha! I just saw that Conrad Winn and COMPAS did the polling. Awesome.

I find it odd, even from the perspective of an ardent climate change advocate - that you are more upset about the hackers than the hackees.

For a scientist to talk about destroying documents rather than complying with requests for information.. it's an affront to all scientists, not just to climate change advocates.

But if you match that to the date line you see they are off by 4/5 hours, which suggests that--given the emails were taken from a U.K. server--they passed through a computer in the Eastern U.S.

And the poll was of course published by the National Post, aka the official propaganda wing of the Reform, oops I mean the new Conservative Party of Canada. Yawn!

I find it odd, even from the perspective of an ardent climate change advocate - that you are more upset about the hackers than the hackees.

Maybe you should start paying attention and stop trolling, Rob. There have been a variety of posts here, some dealing with the content of the emails, a few with the hack itself.

How do Albertans learn to be such assholes?

Why is it honorable for civil servants to disclose private emails as "whistle blowers", but a computer hacker provides evidence of clear bias of so-called "objective scientists" - and he or she is a criminal.

And.. I suppose, in the interests of full honesty, I probably would be more upset if it were a hacked government email contrary to my own personal point of view.. but, here's the deal:

TG.. if some computer hacker found a record of a deleted email from Peter MacKay saying that he had full knowledge of prisoner torture in Afghanistan, and just didn't give a damn, and advised the recipient to delete the message "in case someone applied under freedom of information law" to see it.. would you feel the same?

Because if it is a hacker, esp. one from the states, then it is illegal. That it might come from the states is interesting, because that is the Center of the denialist industry. As to the content of the emails, you are blovating. Sarah Palin is NOT an expert on this stuff, OK?

TG.. if some computer hacker found a record of a deleted email from Peter MacKay saying that he had full knowledge of prisoner torture in Afghanistan, and just didn't give a damn, and advised the recipient to delete the message "in case someone applied under freedom of information law" to see it.. would you feel the same?

That's French by the way. You can look it up.

Seriously, these little "what if" games are tiresome and off-topic. I don't think the two situations are comparable at all. If would never occur to me to compare them.

Learn to focus or fuck off. These deliberate distractions should be beneath you. They're beneath me, in any case.

Had to chuckle a bit at that, as it makes it sound like knowing Unix gives you the awesome ability to convert from epoch time to standard time through sheer mental power.

I bet buckets can do it, though.

Knowing Unix gives you the awesome power to meet any and all intellectual challenges and to emerge victorious!

Off-topic, but Paul Wells does something useful for a change.

Note that in the comments section, the benighted "Wilson" troll refers to someone named "Blanchard," in her rush to vilify the Globe and the Liberals.

She must be hitting the bottle quite hard these days.

I would apologize on behalf of my province, but Ti-Guy's got a point. (I'm an Albertan who frequently gets speaker requests from the provincial government rejected.)

BigCityLib, do you read Frank Bi at all? He's been digging into this for a while, and three files don't fit that timestamp. We don't know what this means, yet.

No, Brian D, but I know who he is, and I'll keep an eye out now. I love a good mystery.

I bet buckets can do it, though. heh, heh. No, I think that the whole space-time continuum works rather against that.