One nice thing about Ezra's attempts at on-line sleuthing: you usually just have to click through a few links to figure out he's bullshitting (which implies, incidentally, that he's counting on his regular readers to be too stupid to click through the links). Anyway, here's Ezra smearing KAIROS:

If KAIROS aren't a bunch of anti-Israel bigots, then why...

are they furiously editing their website to add disclaimers to links, or remove links outright, to virulently anti-Israel and anti-Semitic groups?

But... there was the small problem of their website, rife with calls for political war against Israel, and links to groups who lacked KAIROS's Canadian sophistication about how to phrase their bigotry in the soothing tones of diplomatic gibberish. About a week ago, one of their more sober friends obviously told them, "maybe you should lose the kauft nicht bei Juden business. Mark Holland isn't the CIDA minister, you know." So down the memory hole went page after page of their propaganda -- and up went new disclaimers that their anti-Semitic allies were just being highlighted for informational purposes. Nothing to see here!

As a bit of an aside, note how The Ez can't seem to decide if being anti-Israel is the same thing as being anti-semitic or not. But in any case, here's the allegedly altered page of Israel-Palestine links: 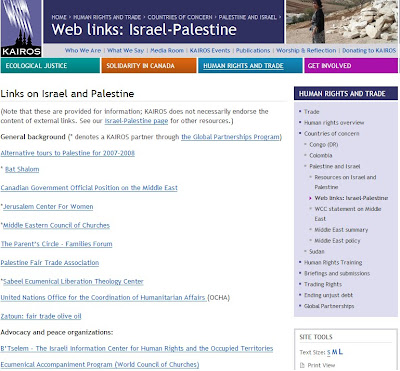 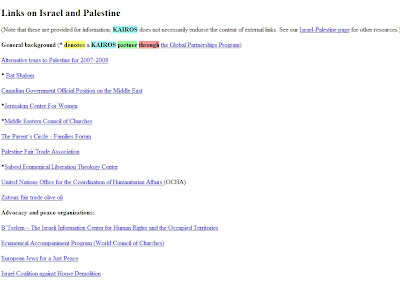 The formatting is a bit different, but the disclaimer is still there, and all the links appear and are in the same order as the more recent version of the page.

Something those folks who are getting sued for taking Mr. Levant at his word should take note of.

PS. Looks like Ezra has abandoned the speechy Jihad. I eagerly await his next project--a book on the Tar Sands tentatively entitled "Oiled Up".

You'll notice if you click through my first link above, the text has changed. I think Ezra read my origonal post and did a bit of redacting of his own. He now writes:

...are they furiously editing their website to delete pages of links to virulently anti-Israel and anti-Semitic groups?

Now, if you click through this link, you go to a really ugly looking URL that gives you a "404 error"; Ezra claims this page used to be on the KAIROS site, and has been pulled since. True, if you link from one of the pages in the google cache version of the KAIROS site you hit this page. However, if you go to the current site, and click on Human Rights and Trade -> Countries of Concern ->Palestine & Israel, you go here, which is the page Ezra claims is missing. So it looks like he's calling KAIROS anti-Semitic based on his own inability to maneuver around a standard issue website.

Later, Ezra "evidence" mutates further. It appears that he has found the one Palestine-Israel page that previously (in October) lacked a disclaimer as noted above, and uses the fact that one was added later to argue that the site is "rife" with "after the fact editing" and link deletions.

Posted by bigcitylib at 6:49 AM

I catch denialists of all stripes doing the same. Isn't it brazen? But it works.

We need a concise name for it, other than the obvious 'lying.' Some stinker of a name that is descriptive without being high-brow.

I just talked to Zorpheous, and he doesn't think he's ever coined a phrase for it, which is surprising.

'Misattribution' is non-specific and boring -- though what I'm getting at is 'dis-attribution' more than anything.

I found the same thing about NGO Monitor, the right wing Israeli NGO watch lobby group Kenney's office has twice claimed to be getting their intel on KAIROS from. When you click through to their links to Kairos, Kairos is not saying what NGOM says they are saying.

We need some clever combination of 'lie' and 'link'...

I find that some Conservative bloggers, who are the biggest advocates of free speech, have comment moderation turned on and are likely not to accept the publication of opinions contrary to their own.

In November 2009, the Canadian International Development Agency (CIDA) denied KAIROS’ application for a $7 million/four-year grant. This resulted in scrutiny of the organization’s advocacy, including its politicized involvement in the Arab-Israeli conflict.


In response, media statements from KAIROS and its supporters have claimed that there is no evidence that the organization was active in anti-Israel campaigns, such as BDS (boycotts, divestment, and sanctions). This information is inconsistent with information published by KAIROS:

1) On January 7, 2008, KAIROS published a “strategy paper” entitled “Economic Advocacy Measures: Options for KAIROS Members for the Promotion of Peace in Palestine and Israel.” This document endorses divestment from Israel, explicitly promoting the campaign in the U.S. Presbyterian Church and led by the radical Palestinian NGO known as Sabeel. The text also describes KAIROS’ plans to coordinate these activities among its member churches.

2) KAIROS’ “Resources for education and action” webpage (accessed Dec. 30, 2009) includes material from “KAIROS partner” Sabeel: (a) a call for anti-Israel divestment, and (b) a statement describing Zionism as an “ideology of empire, colonialism, and militarism.”

3) Although the KAIROS’ press release (Dec. 18, 2009) asserts that “KAIROS took a public position opposing sanctions and a boycott of Israel,” there is no reference to divestment. Indeed, as seen above, KAIROS is very active in this element of political advocacy.

4) Sometime after Dec. 8, 2009 (when NGO Monitor reviewed the website) KAIROS added a disclaimer to its resources page (accessed Dec. 22, 2009): “Note that some of these resources are not written by KAIROS and do not necessarily reflect KAIROS policy.” (Version without disclaimer can be seen on Oct. 15 cache of this page.)

I am glad the government is bringing all this to the attention of the people of Canada. Kairos is a hard left political organization that spends less then 5 percent on aid to the poor. The taxpayers are well served when we cut off the funding of this propaganda machine.

Kairos is a fraud

The media portrayal of Israel and the I/P conflict is the real fraud.

Why does our intelligentsia shy away from asking a simple question: "Does the ethnicity of media ownership bias news coverage."

1)KAIROS has repeatedly been attacked for supporting a boycott, and this has repeatedly been denied by KAIROS. Its position has been constant, was arrived at consensually by all the major Canadian Churches. Divestment is a much more subtle process, and it is irresponsible to assert that anyone deliberating on divestment is 'anti-semitic'.

2) the accusation that KAIROS describes Zionism as an "ideology of empire, colonialism, and militarism" is repeated over and over by NGO Monitor, most recently in Embassy magazine. This is also completely false. NGO Monitor is referring to a press release by Sabeel linked to from KAIROS' Resources and Actions page called 'Challenging Christian Zionism'.
First off, the quote is from Sabeel, not KAIROS; second, they're talking about *Christian Zionism*, not *Zionism*. If you don't know the difference you need to do a whole lot of research, and quite yapping until you've done it. The second wants a Jewish state, the first wants a Jewish state as a precursor to Armageddon where everyone who ain't Christian gets fried (including Jews who haven't converted). Calling it an "ideology of empire, colonialism, and militarism" is sweet talkin'.

3) There is a big difference between boycotting and divestment.
Here's their policy, set out long before Jason Kenney's inflammatory statements (he seems to have his tail between his legs now):
http://kairoscanada.org/fileadmin/fe/files/PDF/HRTrade/Pal-Isr/Paper_EconomicAdvocacyMeasures_Jan08.pdf

4) What a surprise that a disclaimer was added (there were already disclaimers on other projects). When Bozos like NGO Monitor can't tell the difference between KAIROS policy and a Sabeel Press Release, nor the difference between Christian Zionism and Zionism, and then go publicising their ignorance to everyone who will listen, then I guess an organization needs to start making things a little more obvious.

Levant is intentionally, and flamboyantly, misleading. His understanding of 'free speech' is you can say what you want, when you want, to whom you want, whenever you want. Truth need not be any part of the equation. The only people who can do this are children under five and Hummer driving, cigar smoking, high-heeled, libel lawyers - like Levant. From this perspective, 'free speech' is only available to infants, and the rich and powerful.

How ironic it is that the folks whose funding will be cut by Kenney's nauseating accusations of 'anti-Semitism' (http://www.kairoscanada.org/fileadmin/fe/files/PDF/cidacuts/CIDA-PartnerStories.pdf) are precisely those whom KAIROS has been supporting to have free speech, and who have been dying for it.

The early bird catches the worm. It seems that you're a successful blogger; thank you for all you have done for your online audience! Don't forget about dissertation editing services - edit-ing.services - we are open 24/7 to exceed your expectations!