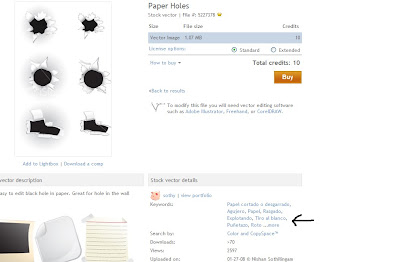 Stephen Taylor makes a desperate attempt to avoid assassination joke equivalency by producing the very "paper holes" istock file used by the Tories in their ill-advised "Dion surrounded by bullet holes picture".
Except he doesn't reproduce the entire page from istock (screenshot above).
Note the keywords for the file, esp. where I've placed the black arrow: Tiro al blanco. Hmmm! Wonder what that means. Click click click! Say, it means "target shooting"! Booyah! Just as suspected, the holes are the holes shot in a paper target!
So lets wheel out the apologies, Taylor, starting with PM Harper's mama and working its way down. One from Harper himself and, for me personally, one from Stockwell Day. Because Stockwell Day just annoys me. Remember, Stephen, its always best to apologize upfront. The scandal fades quicker that way.
And pull the offending pic from the CPoC website. And, oh yeah, you're getting creamed in my poll.
PS. Just to be clear, here's a shot of the file's keywords in English: not the English expression "target shooting". 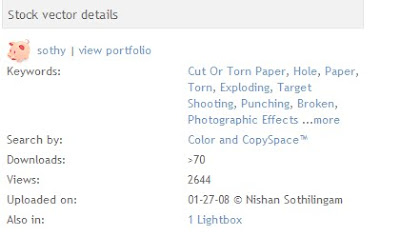 Posted by bigcitylib at 6:14 AM

You partisan bloggers really do need to get a life.

What makes you think I'm partisan?

How does the Dion Ad excuse the Photocontest other than changing the channel?

Everytime a side screws up, we should expect the other side to distract with another issue from the past?

MI needs to accept responsibility and end this lack of adult supervision on their website.

You and ST did a good job on PP, you two should be paired more often.

This is just a continued attempt by folks like Taylor to talk about anything other then Richard Colvin/detainees/Afghanistan (or Copenhagen in general).

Poor CS...
I think that MI has taken hits from his own party and Liberal bloggers.

There is something rather delicious about you calling for some decorum given how the Conservative have asked over the years.

Don't get me wrong, I understand that some could be upset by the Ruby/Harper image. The Liberal party has done the right thing with the apology. One would wish the same level of maturity from the Conservatives.


And yes, even after having debunking all claims that the Dion image is just paper holes, the collective idiots (aka Blogging Tories) are still trying to make an issue of it.


As Scott points out, there are more important issues and sadly, the Conservative only seem to reflect the childish behaviour of their blogging cousins...


The "Colvin/detainees/Afghanistan" issue is important, none the less, because if we are complicit in torture, then Canada has no moral authority in that region and should bring back the troops ASAP.... To have participated is the contrary to "winning hearts and minds". And people wonder why we are losing so badly over there...

"How does the Dion Ad excuse the Photocontest other than changing the channel?"

Who ever said the Dion ad excused the photoshop.

But don't let the facts get in your way - they rarely do.

If things were all black and white, I would answer according to your dictates.

But they aren't. I suspect you know that, which is why you demand an answer without an explanantion. Sorry, but you do not get to set the rules. You are not seeking a real discussion and I am not interested in letting you dictate terms of any argument.
(sux when your talking points are used against you)

bullet hole There are over 592 results for 'bullet hole' at istock.com. An awful lot look EXACTLY like the so-called paper holes. Taylor's claims simply aren't believable.

Using a translation to try to prove a barely relevant point puts you so far out in la la land.

The french term 'Mon petit chou' is a term of endearment which translated to english is something like 'My little cabbage'.

When an english person uses an english term, they mean it to be understood. . . in english.

"(sux when your talking points are used against you)"

Not when my arguments are totally misunderstood and accordingly, misapplied by you.

Then it only makes you look like more of a fool.

The only reason I ever respond to you anymore is because I know it is going to send you out to the internet, searching for something I said so you can cut and paste it into your comment.

Thanks for for being totally predictable. It amuses me.

Frunger: give it up. They're clearly supposed to be holes in a target.

Thanks for for being totally predictable. It amuses me.

Which has what, exactly, to do with my comment again?

Maybe you should re-read the comment. I am sure you can figure that one out all by yourself.

Don't quit your day job. Rational argument is clearly not your forte.

One gets the impression that CS just regurgitates insults that have been flung at him over the years...

"Using a translation to try to prove a barely relevant point puts you so far out in la la land."

Check out the 592 results for 'bullet hole' at istock.com and see if you can come back and honestly say that the holes around Dion were meant to be paper holes.

"Using a translation to try to prove a barely relevant point puts you so far out in la la land.

The french term 'Mon petit chou' is a term of endearment which translated to english is something like 'My little cabbage'.

I knew when I saw BCL's inexplicable use of the Spanish-language version of the page that some wingèd nut would pounce on that to suggest it weakens his point.

I didn't count on it being so pompous and grandiose, however.

Sometimes when you hit the page it comes up in Spanish, or maybe other languages,and other times not. No idea why. But I've found an English version now.

The whole bullet hole/paper hole debate is starting to feel like the match between Arthur & the Black Knight in Monty Python & the Holy Grail.

It's a bullet hole. How much more proof do they need?

Must have a binder of notes with crappy arguments to refer to.

Oh and speaking of work - CS is all over the blogosphere 24/7 - either CS is ripping off his/her employer or isn't working and never sleeps.

with the opposition being the black knight?

Seems to me the lot of Libs in this thread hoot and howl when the Cons deflect by pointing to past government failings.

When their guys get called out for poor taste all we hear is 'Yeah, but the Conservatives did it first!!'

At least CanadianSense is the only one with a little, well, sense.

I do congratulate you though BCL, for not purging your comments of anything that doesn't toe the party line. Steve V could learn a few things.

That guy hates it when others play in his sandbox.

Actually, I suggested two days ago that the Libs pull pic and apologize and all that happened in less than 8 hours. The Dion pic has been up over a year.

"One gets the impression that CS just regurgitates insults that have been flung at him over the years..."

Every single reply to my posts involves a series of comments I have made to others. I think he is obsessed with me.

"When their guys get called out for poor taste all we hear is 'Yeah, but the Conservatives did it first!!'"

Well, there is are a couple rather massive differences.

First, the LPC and their supporters have virtually unanimously taken the position the photo was offensive and an apology was appropriate.

Second, no one here is saying "the cons did it first". The point is the moral outrage coming from the BT'ers rings a bit hollow considering their own web content.

In other words - it is not a defence of the offensive photo.

I can't believe that I am actually goning to comment on this stupidity, but as someone who actually has some experience with firearms and has put thousands of holes in paper with bullets, I can tell you that the holes produced look nothing like the holes in the Conservative image.

Fuck you idiots are petty.

The point is the moral outrage coming from the BT'ers rings a bit hollow considering their own web content.

Precisely. It's an issue of proportionality here. The Dion stuff went on for years, culminating in the veiled allusions to assassination and, more importantly, continue to this very day.

"Fuck you idiots are petty."

Im sure the same is said of Jim on a daily basis.

I think your Mom just called down the stairs...your grilled cheese sandwich is ready.

BTW, on this side of the blogs I would consider "petty" to be a compliment.