Jason Kenney And The Case Of Gay Romeo 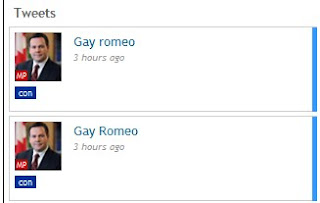 From the date-stamp, it seems that the tweet was first composed at about 4am, December 11, 2009. Early morning, then--one of those dead, quiet times in which the mind is flooded with late-night thoughts. Who am I? What have I become now that Youth has fled me?

And then it is retweeted, as though after a moment of profound consideration: "Gay Romeo. Yes! Gay Romeo indeed!"

And then it is scrubbed from the official Jason Kenney twitter site: "Too Soon! Too Soon!".

Perhaps. I am of course speculating wildly. But it would be interesting to ask Mr. Kenney: who is Gay Romeo? And why this morning did you tweet his name?

Email ThisBlogThis!Share to TwitterShare to FacebookShare to Pinterest
Labels: Gay Romeo, Jason Kenney, Tory Something Or Other

You might also want to ask him why he's spending more time in Toronto than in his home riding. What's he doing there that he can't do in Calgary?

Not necessarily a "hack." Just someone getting his hands on Jason Kenney's Blackberry...on his night table...at 4:00 AM.

What happen to his twitter?It been hack?