...at all the dead and delayed Tory Legislation, for the only way to to reintroduce these bills at the same stage they were at before prorogation is through the unanimous approval in the House of Commons, and we can assume that this will not be given. Now, Kady notes 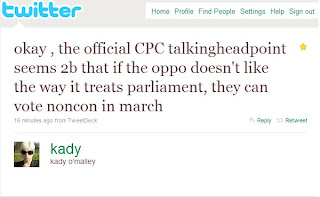 But why bring down the government when it is so thin on new ideas that it has to repeatedly sabotage its own agenda so as to campaign on the old ones over and over? I mean, governing becomes a pointless exercise but at least no harm is being done.

PS. More on the dead bills here. The CN strike will go on, and don't even try suing Khadafi in a Canadian court! All so Dean Del Maestro won't have to watch figure-skating and legislate at the same time!

Email ThisBlogThis!Share to TwitterShare to FacebookShare to Pinterest
Labels: Prorogation

Now the question is whether or not the opposition parties will actually slap the government around for it.

Sadly, none of the opposition have exactly done a good job of swatting the Con$ about lately - but portraying them as policy bankrupt is actually a great way to portray them.

I had the same reaction, but I think it's that reaction that (in part) that lets them get away with this in the first place.