We get the following from Preston Manning over the weekend:

Preston Manning is calling out "hypocritical" federal NDP Leader Tom Mulcair for "preaching" to Alberta while turning a blind eye to energy problems in Quebec.

The problem with Mulcair's position, Manning said, is that the former Quebec minister of sustainable development and the environment has never been heard "crusading to internalize the impact of Quebec's hydro operation."

Manning told Solomon hydro companies have flooded forest areas "the size of lake Ontario," so "where is the reservoir tax that's the hydro equivalent of the carbon levy?" Manning asked.

Fair enough.  But lets follow the logic of this thinking.

That hydro projects can have fairly large scale emissions of GHGs associated with them is fairly well known.  In fact, in the run-up to its 2006 discussions the IPCC considered having countries add emissions from lands flooded by new hydroelectric projects (meaning 10 years old or less) to their National Inventory Reports, which reports show each country's carbon budget.  And indeed if you look at Canada's report (submitted in April of 2011), you will see (in Part 2) that:


It is important to understand the "10 years or less" stipulation.  The graph below shows what happens to GHG emissions from hydro projects (at least in the Canadian context; dams in tropical locations are a somewhat different story): 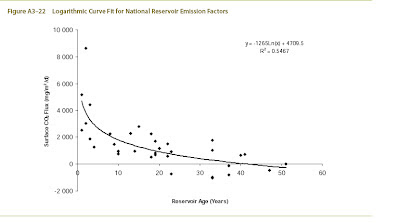 That is to say, peak emissions (from drowned vegetable matter) occur in the very first couple of years after flooding.  Furthermore, if you look at the total amount of Lands Converted to Wetlands (Flooded Lands) in Canada over the period of the report (1990 to 2010) you get this:

...mostly because the building of Hydro-Quebec's large projects came to an end in the 1980s and 1990s.

So the rule is to stop counting emissions after the first decade.  And therefore, at present, the majority of hydroelectric projects in Quebec, assuming your reservoir tax is connected in some reasonable fashion to emissions as counted in the national inventory, would evade the tax or pay very little.  Furthermore, even newer projects like Eastmain-1 would only be subject to a tax for the next couple of years, its reservoir having been completed in 2006.

So you might defend Mulcair here by saying he isn't promoting a reservoir tax because its usefulness  in "internalizing the impact" of Que.'s hydro would be minimal, because that impact has itself become minimal as time has passed.

But there's a broader point to be made.  Quebec's investment in hydro-electric, though immensely controversial at the time, has led it to be well positioned in any discussion re cutting emissions.  There is no variant of a national cap-and-trade scheme in which Quebec would not come out a winner, for it has chosen an energy source that becomes greener (emits less) as time goes by.  On the other hand, nobody seriously expects the Tar Sands to be spewing fewer GHGs in 15 years.

They are not environmentally progressive in Quebec because they like trees and flowers, although I am sure they do.  They've chosen to run their province with an energy technology that allows them to be.

You've hit the nail on the head with the thought that in any carbon tax or cap scheme, Quebec would come out better than today (as would Ontario).

That is why Harper is discussing only pick and choose regulations (which he may even implement some day ...).

Regulations may cost the tar sands the same or even more than an economically efficient carbon tax. Even the oil companies themselves have said this, preferring a tax over piecemeal, bureaucratic regulation.

But regulations can be crafted so as to not provide any advantage to Ontario's and Quebec very clean energy generation.

It's Harper's plan to keep the East down and dependent on Alberta. Not so much to advantage the tar sands, but more for his party's electoral advantage.

With a carbon tax:
*) Alberta pays some price

*) Ontario and Quebec clean energy industries gain an industrial boost, independent of the tar sands. Ontarians may be less likely to vote Harper if their economic future is seen to be less tied to Alberta's.

*) Ontario gets no clean energy industrial boost, and keeps the province's industrial growth tied near exclusively to tar sands. But Harper gains electoral advantage, as Ontarians may vote so as not to displease their Albertan paymasters.

Most Pen Drive use a ordinary type-A USB connection allowing plugging into a port on a personal computer, but drives for other interfaces also exist. In 1999 – 2000, pen drives ware invented by Amir Ban, Dov Moran and Oron Ogdan, all of the Israeli company M-Systems. The first Pen Drive was manufactured in early 2000 by a company called Trek with product Thumbkey, shortly followed by M-systems (now SanDisk) with their DiskonKey drive. Pen Drive combines a number of older technologies, among subordinate cost, subordinate power expenditure and tiny size made possible by advances in C.P.U technology. In 2000, IBM and Trek Technology began selling the first USB flash drives. Starting commercially at memory levels in the kilobyte range, memory capacity skyrocketed over the next several years into the multi-gigabyte level. Now a day’s Pen Drive / USB flash drives is a most popular device of all around the world. Every computer expert or under expert use it for data transfer and data storage. It has made the world a very different place. Latest uses and adaptations come almost each year, and the demand is increasing with each new technology.
hydro electric
hydro electric power
what is hydro electric
what is hydro electric
inventhistory
power generator
wind power generator
solar and power
electric transportation