As regular readers may know, I spent a good part of May 2012 trying to convince that subset of the Heartland Institute expert list  who were also legitimate scientists to distances themselves from HI for their disastrous billboard campaign, with some modest success.  Well, one of the people I emailed was Richard Epstein, a  Professor of Law at NYU School of Law.  I can't claim causality, but it is worth noting that he is no longer on the HI list about a month after I made contact with him.  So 1/2 a BOOYAH! for me.  Here's the googlecache of his entry, and a screen-cap below: 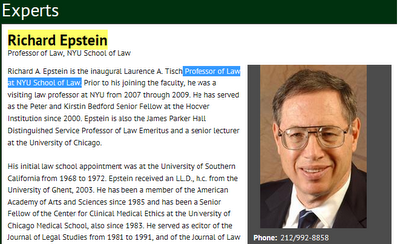 I would also point out that, a week after I contacted Jan Veizer, and he claimed he didn't even know he was on the HI list, claimed in fact  that he did not "appreciate" being on the list...he's still on the list.  I have no idea why; I've suggested to Marc Morano and Joe Bast and some of the other HI lads  that they pull Mr. Veizer's entry, but apparently they have not.  I shall try and clarify what is going on today.

Keep up the good work. Someone needs to be keeping tabs on these extremists.