Slowly, slowly, after many months of inactivity, tar-sands promoting lobbying thingy EthicalOil.org has been trying to reboot. Amanda Achtman has become their media contact, and they've attempted a few (guest) posts  on their website.  Furthermore, last month Amanda put together a  "Social Oil" youtube video, which was announced to some fan-fare.  But then after that one media hit...nothing.  And if you follow the links at EO you see: 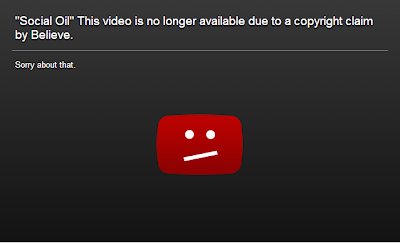 Curious, I contacted Amanda to find out what was up.  Turns out EO had originally used this song by Fatboy Slim as soundtrack, and given the video's controversial nature, Fatboy's record company (note the blog name) had lowered the boom on them.  A slightly different version can be found here, not that I am recommending you watch it.

So, for some reason, Ethical Oil is back.  We shall see if they regain the level of influence they once, briefly, possessed.

Posted by bigcitylib at 1:22 PM

Normally I would want to say screw the record companies. Never thought I would see the time when I'm actually cheering for one. In this case, I'm hoping EO finds themselves in a lot of legal trouble.

Yes, very entertaining. The Ethical Oil website has a guest post by a second year law student at George Mason University in Virginia - the student residence building of said university is named Liberty Square -( perhaps a future entertainer on one of Ezra's Freedom Cruises) who argues that opposition to oil sands development is not merely anti-industry and anti-progress but "anti-human" to boot and places all western civilization in jeopardy, with said "civilization" identified as the thriving community of Fort McMurray.

In Yahoo discussions, said center of western civilization is oft described by residents as a hotbed of crime, prostitution, drunken binges and drug addiction....

George Mason U, while I think it does have real climate scientists, also gets lots of money from Kochs: http://www.desmogblog.com/koch-and-george-mason-university