Giant Sloth: Its What's For Dinner 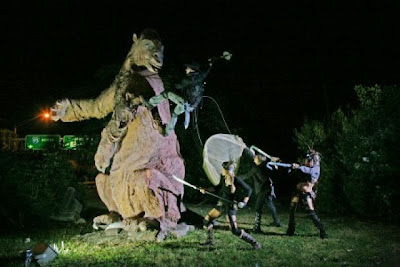 From The Archaeology News:

Most scientists agree that humans began arriving in the Americas between 13,000 and 15,000 years ago, and the Clovis people of North and Central America are generally considered the "first Americans." But new fossil evidence from a streambed in southern Uruguay could challenge such theories.

Results published in Proceedings of the Royal Society B suggest the presence at the site of human hunters who may have killed giant sloths and other megafauna. That itself isn't odd, but the site, called Arroyo del Vizcaino, has been radiocarbon dated to between 29,000 and 30,000 years old—thousands of years before people were thought to be there.

My favorite bit of the article is this:

The date of Arroyo del Vizcaino may make some archaeologists cringe: South America's earliest human settlement at Monte Verde in Chile dates to only 14,000 years ago.

Because this ignores the fact that a deeper layor at the MV site was dated to 33,000 BP.  But Tom Dillehay, who has done most of the work at Monte Verde, had so much trouble getting the earlier dates accepted that he never really pushed the apparently older material.

In any case, here's what the folks at Arroyo del Vizcaino actually found:

No carnivore tooth marks were identified. Nearly 59% of the bones collected show modifications with features identifiable as trampling marks [26], with over one-third of the bones exhibiting trampling abrasion on more than 25% of their surface area (see electronic supplementary material, figure S7). Furthermore, 40 elements (nearly 5% of the identified specimens, a percentage similar to the proportion in human sites [23]) show marks that have macroscopical features consistent with human agency (figure 4; electronic supplementary material, figures S8–S13). Ten of the bones that showed little or no trampling abrasion in the studied area of the anthropogenic-style marks were examined under greater magnifications. A total of 15 marks were analysed from the selected bones. Congruent with previous preliminary findings [27], most of these marks show microscopical features described in cuts made by human stone tools, such as shoulder effects, Herzian cones and even microstriations [12] (figure 4a–e; electronic supplementary material, table S6), the latter being very rarely preserved in prehistoric material [11,26].

Turns out I've written about Giant Sloths on previous occasions.  Here, for example.