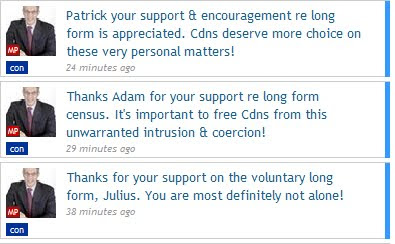 No sign of their emails, nor their twitter posts either. But they're out there....1,000s of them. A very silent majority. Invisible. Mysterious. But they talk with Tony Clement, and he hears 'em!
Update: Now Tony claims to be unwilling to reveal the twitterdentities of the brave folk you have spoken up in favor of the government's position re the long-form, for fear they might be verbally abused. But the thing is: he's on politwitter (see link) and if these people were real, wouldn't their IDs appear in the right side column?

Posted by bigcitylib at 2:05 PM

Email ThisBlogThis!Share to TwitterShare to FacebookShare to Pinterest
Labels: Census, Tony Clement and the voices in his head

Well, it does say "Con" under his photo, so i guess it's truth in advertising at least.

And, thanks mom for your support.

Tony Clement Minister of Sock Puppetry!
Not only is he having trouble with the complexities of "robust statistics", Tony fails the simplicities of internet 101.

Um... how dumb do you have to be to get these chice gigs?