Zig-Zag was there, and got away to write about it. A few notes:

1) Probably the most interesting bit is his schematic of the Black Bloc rampage: 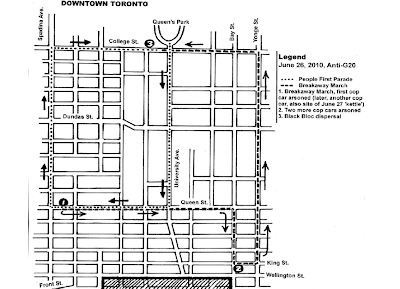 2) On the numbers taking part:

Finally I stumbled upon the 'break-away' march as it neared the downtown financial district, going south on Bay Street. There were perhaps 600-700 persons, and I could see a loose and chaotic Black Bloc was there as well. Black-clad affinity groups were spread throughout
one section of the march, but there were many other militants with masks as well. Many people had no masks, or just a bandana over their lower face (not an adequate disguise, by the way).

3) One iconic moment occurred during the protests when riot police attack a crowd that had just finished singing O' Canada. The youtube clip is here. Ziggy's remarks:

After an hour of this, the OPP retreated and left the area, marching out as they had come in, in columns of two. The crowd surged back across Spadina and into the block where the damaged cars were. Then the second police car was set on fire to cheers from the crowd (most of whom weren't protesters). After fifteen minutes of the cop car burning, the OPP returned. Then more cops, including horse-mounted pigs and buses of RCMP and Newfoundland Constabulary arrived, all dressed in full riot gear (a truly national effort).

At one point, a person suggested the crowd sing 'Oh Canada' (the national anthem), as if the spirit of patriotism would endear them to the line of riot cops facing them. Another fool walked to the front and sat on the street, with his back to the cops, and persuaded others to join him. As soon as they finished singing the anthem, the riot cops charge, trampling several.

4) There was no police conspiracy, as in the case of the Montebello summit, where police infiltrators were identified on the basis of their footwear by...well...me. In Toronto, incompetence and immobility were the order of the day:

The ability of the bloc to move quickly enabled it to outmaneuver the riot cops, who were hampered by a slow response time. Wearing up to 80-90 pounds of gear, they could not move fast enough over any distance. Just to get to an area required moving chartered buses or
convoys of mini-vans through city streets (not an easy task even under normal traffic conditions).

I observed one convoy of vans, for example, moving to stop the protest that was eventually mass arrested on Saturday night (at the Novotel Hotel). After the protest had passed south down Yonge St., the convoy rolled up and stopped at an intersection. A pig got out of the lead vehicle and began walking back, telling others he had extra batteries for their radios. Pigs got out of the vehicles and made last-minute adjustments of their gear, then got back in. The whole process took some 5-10 minutes.

5) The Bloc treats other protesters as, essentially, human shields. Zig-Zag even makes reference to the Afghan/Iraq insurgency.

6) Zig-Zag discusses a number of "solidarity attacks" in the wake of the summit. It's maybe significant that the bombing of the armed forces base in Trois-Rivières by the Résistance Internationaliste is not mentioned. Maybe they're not part of "the movement"?

Posted by bigcitylib at 8:10 AM

We need to route out evil like the Black Bloc!

Too bad they couldn't declare the Black Bloc as terrorists which is what they are and then not allow them to cross borders.

I think some protestors are getting too worked up. I certainly don't feel oppressed. I do think Blair/McGuinty et al are Harper's fall guys just like public servants, etc.

There need to be a "Federal" inquiry. It was an international event with police from all over Canada, in other words federally, not just Ontario's headache.

Interesting the the Cons fillibustered a committee meeting when the opposition parties wanted a Federal inquiry - highly suspicious to me.

And yet there are cops on record as having said they were ordered not to engage the black bloc types. It was not because they were unable to move quickly enough as Zig Zag clamins.

2 things:
1. You say, "There was no police conspiracy, as in the case of the Montebello summit..." Now THAT, my friend, is a huge assumption. How the hell do you know? Nobody knows - and won't know until there is a Public Inquiry!
2. Why did you even bother. THIS is your big analysis of "how it all went down"?! There's no analysis here. And you obviously didn't bother to check out the plethora of videos online, nor the stories of the people detained, nor info about the detainment centre & the behaviour of the police. Why did you even bother posting this. Disappointing, to say the least. (oh yeah, & as Filibluster said, the police said that they were ORDERED not to engage the Black Bloc -Who are idiots, btw). You didn't even manage to get that widely-known piece of info in here.

Liberal Justice (something of an oxymoron there) - how can you call them evil when they were in the presence of the true evil in the world - the G20 heads who have despoiled the environment, starved the innocent and impoverished the rest.

I am not aware of a black bloc contingent in Afghanistan, killing wedding partiers with armed