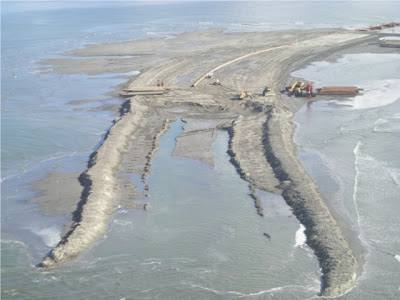 In June, GOP Governor (GOP ) Bobby Jindal ordered the construction of a series of berms to keep oil from the Deepwater spill off the Louisiana coast. They were built by popular demand, as it were, but against the wishes of local scientists, who argued that the benefits did not outweigh the risks, and that the berms would not last out the 2010 hurricane season.

The same berm pictured above, in early July: 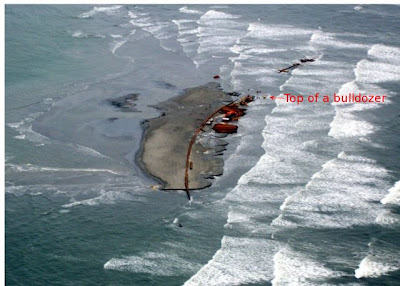 A metaphor for so many things.

Posted by bigcitylib at 1:12 PM

Is doing nothing to protect the shoreline what the 'experts' advocated?

Expert opinion was actually divided on the value of the sand berms, and with over 18 miles of berms, it would be interesting to see how the major segments are faring.

Paul S, can you point to an expert in coastal dynamics who participated in this, please?

The word from the people who actually know their stuff is that this intervention was planned "in a science vaccuum".

Perhaps you know better. If so, do tell us what coastal dynamics professional was involved. (If not, why say anything?)

You're talking to him, Michael.
A few hours with Google, plus a good dose of his impeccable common sense, and Paul S is himself an expert in coastal dynamics, along with the entire Fox News viewership.

The lesson Paul S, and it is one I would have thought true conservatives would be screaming, is that policy decisions without facts lead to waste.

The berms are ineffective and costly. Could that money have been used more wisely or efficiently, say toward clean-up?

Conservative policy is never wasteful or ineffective, Ted. It's built upon a stronger foundation than elitist "expertise" and empiricism - common sense.

Numerous experts endorsed sand berms which is why 18 miles of them have been built.

Of course portions of the berms were washed out. You do realize there was a recent storm in the area, no?

And if you had read some of the relevant documents from the National Incident Command Barrier Island Berm Meeting held in June you might have been more informed on this subject.

The reason more berms weren't built was because of the federal bureaucracy's inertia. If the federal government had responded sooner, less marsh might have been damaged.

The concepts behind this are probably sound, - Denise J. Reed, Professor and Laboratory Director, Pontchartrain Institute

. . . from the Army Corps’ perspective, there were some areas where this (sand berms) might work . . . - President Barack Obama

Shorter Paul S: Why take responsibility when we can blame the liberals or democrats.

How is that job as an expert in coastal dynamics Paul S?

Im sure I could search up enough Paul S is a moron quotes to back an argument that you are.

Shorter Paul S: Why take responsibility when we can blame the liberals or democrats. - Gene

Protection of the coastline in the US is a federal responsibility. If the Dems can't handle the heat, don't take on the job.

The sand berms were allowed by the Obama administration to proceed because they were the best means currently available.

What do your unnamed experts advocate Gene? Another six months of study first?