Lots of stories out re Quebecor's 2nd quarter results.  Short version: their profits were down, but not as much as they could have been.  Interesting to know how the pluses and minuses within the company were distributed, however:

Now there's been some play about this story where Sun Media claims that Ezra beat out some CTV reruns in the ratings game, for the first time in history, apparently.  But even if true, to brag about outdrawing a news loop is pathetic.

If you want to know the real state of Sun TV, dig this: 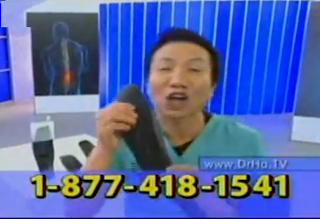 ﻿Yeah.  Its Dr. Ho, the shoe insert guy, advertising on Ezra's show at about the 8 minute mark.  Not a 30 second spot either: over two minutes of this guy telling you how he can stop your feet from smelling.
When Dr. Ho is the the only guy buying ads on you TV station, it ain't making any money.  (Though there is apparently also a guy that paints himself silver and flogs junk jewellery, but I haven't seen him appear yet).

Posted by bigcitylib at 6:12 AM

what? Only Dr Ho? What happened to that weirdo who painted himself silver who said he would take all your silver jewelry for (guffaw)'top dollar'? I remembered him when Fox News North first went on the air too.

I watch too much Sun TV.

Now you see why they need that Category 1 license so the cable and sat companies are forced to carry their signal on the low 12 channels and pay them for the privilege, whether anyone watches or not.
They keep turning down the power on CKXT 52 to save money but still stay on the air enough to force the cable companies to at least make them available as a specialty channel. Otherwise, they would be like HGTV with no transmitter, and forced to produce content that large numbers of people want to watch.

That whole turning up the transmitter and you know, competing for viewers, is just so 20th century.

They just have to wait until Kory (who now has Broadcast Industry experience) replaces Finkenstein at the CRTC and then they can transfer CBC's Category 1 license to Quebecor.

Look at that little moron, that's the way you do it, get money for nothing but no chicks for that creep.

Sewage Treatment Plant to be named after Levant: