In the midst of a rant suggesting that Rob Ford aim his cost-cutting axe at Toronto Fire Services, The Sun's Sue Ann Levy opines:

As I happened by the Yorkville fire hall around 10 p.m., I noticed a couple of beefy firefighters posing for a picture with a bevy of beauties in what looked to be skintight, glittery dresses. They were all draped around a shiny fire truck.

First: a bad writing alert.  It isn't exactly clear from the above sentence who is wearing the "skintight, glittery dresses".  Probably not the firefighters, but hey, its a brave new world out there.  It is also unclear what was draped over the shiny firetruck: the girls, or the firefighters, or both, or maybe even their skintight glittery dresses.  If it was their dresses, then that means the firefighters and the girls were, well, nekkid.  Which begs the question: why was Sue Ann Levy watching?  My guess is she wasn't invited.

No...no... before that, another bad writing alert:

Now I could say something about the scene giving a whole new meaning to the expression fighting fire with fire. But I’ll resist.

Actually, if I had written those lines it would mean I was up late with a bottle of cheap wine trying to honk out 500 words of hoo-hah for a deadline, and couldn't think of anything clever to write about "the scene giving a whole new meaning...etc. etc."

But moving on...for real this time:

But the point is, this is not the first time I’ve seen firefighters on active duty posing with a bevy of nubile sycophants. I’ve observed the same scene at the Adelaide St. station, in the heart of the Entertainment District.

It’s just one more reason to tackle the very untouchable — up to now — Toronto Fire Services.

If they have time to pose for pictures with fawning females in between calls (instead of cleaning their brass poles, or their equipment, for example), perhaps there are too many firefighters at too many stations with too little to do.

Reading this, it suddenly occurs to me where Ms. Levy found the inspiration for her column: 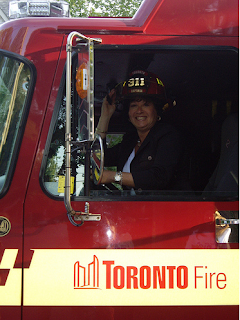 In this picture, from 2009, a TFC fire-crew appears to have let Sue Ann Levy render their fire-engine temporarily out of commission to stage a cheap photo-op for her rage-filled, epically unsuccessful run at the provincial seat of  St. Pauls.  Those lazy buggers!

Now, there are significant differences between this scene and one Ms. Levy describes in her column.  For example, there is not a shred of "nubile" to be found in the picture.  In fact, we can safely say that any ambient nubility in the area either ran away screaming or took a shit and died when Ms. Levy showed up.  Also, note the complete absence of fire-fighters with her in the shot.  I suspect they were invited, and declined.

But this is all from long ago, when Sue Ann found it convenient to ingratiate herself with the TFC so as to scare up votes from those who found such gestures appealing. Now, her interests appear to have shifted.

And, to conclude on a slightly more serious note, her argument, if you want to call it that, is ridiculous.  Fire-fighters aren't allowed to go home on slow days.  They are required to turn up even when there's nothing to do, just the way you keep an army during peacetime.  A kind of precautionary measure, you know?  If there is a good reason for cutting back at the TFC, Sue Ann hasn't found it yet.

Posted by bigcitylib at 6:26 PM

So in other words, the firefighters were a few seconds more ready for a call than if they were upstairs and had to zip down the fire pole to get to the truck.

Those precious seconds could save lives, unless they were lost in getting Sue Ann to move out of the way because she was too busy ogling the bevy of beauties, saddened because of their unattainability.

Sue Ann used to be funny. I always chuckled at her moaning about "Socialist Silly Hall". I don't understand why she doesn't now call it "Fascist Philistine Hall". And I miss her referring to the Mayor's cronies as "minions" and "trained seals".

What happened? The way she writes now, it sounds like Michelle Bachmann's husband "cured" Sue Ann of her lesbianism and she is now making up for lost time with her daily fellating of the Ford brothers.

That was one fine catch, BCL! How did you find the pic?

Personally, I find the suggestion that the firefighters spend more time "cleaning their brass poles" unsuitable for a family newspaper. But then, I'm a little old-fashioned sometimes.

They have standards. Just don't ask what those standards are.

It's amazing that it's come to this -- slagging firefighters.

Found it in a link from origonal article. I think someone in the TFS put it out there.

You need another update. Embarrassed by revelations of her rank hypocrisy, Sue-ee is now whining about being bullied:

Oh my! I'll have to write up something after work, but the links eventually wound up leading back to her campaign flickr feed.