It's tough being a climate change denier these days.  The original CRU Hack managed to spread a season's worth of FUD, true,  but since then every successive release of "damning" emails has got  less and less of a rise out of the MSM.  And no wonder.  Reading from  the latest batch, released to Chris Horner by the University of Arizona, is like going over someone's grocery list.  Scientific shop-talk is as boring as any other kind.  Apparently, even the pursuit of knowledge has its dull moments.

So there's been much desperate flailing about in the deniosphere.  And none  have flailed more than Tony Watts of the Watts Up With That "science" blog.  His recent paper turned out to be an unpublishable, error filled mess and, in general, he's been on a been on a downward spiral credibility-wise for a couple of years now.

Except that, this past weekend, Anthony Watts may have hit bottom.  In a rambling discussion of the Antarctic Peninsula, one of the fastest warming spots on the planet, Anthony puts forward the following thesis:

Regarding that rapid warming of 2C in the last 50 years, just remember that most weather stations in the Antarctic are near humanity, and humanity requires warmth to survive. 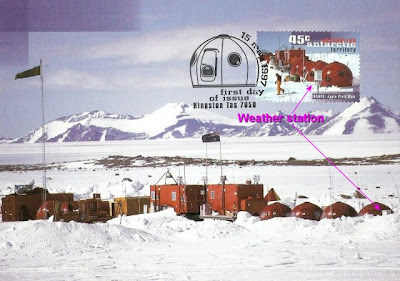 The Antarctic peninsula is the most populated place in Antarctica.

Well,  it turns out that Anthony has illustrated his theory  with a shot of the wrong side of Antarctica.  In fact, one of the (two) guys who was heating the peninsula from across the continent responded in Anthony's comments section:

I guess I owe the world a humble apology for personally contributing so much to the urban heat island in Antarctica, and hence to misinterpreted climate records.

The badly sited meteorological screen in your photo is at an Australian summer camp in the Northern Prince Charles Mountains, near Mt Jacklyn – in the background. Temperatures measured here were for local information of pilots and field parties only – it is useful to have an idea of how many layers of clothes to put on before exiting your Antarctic shelter. Temperatures here were only measured for less than 2 months over a couple of seasons and have NEVER been used for any climate record.

This photo was taken in the 1988/89 austral summer when I, and a colleague Andy, lived in the UNHEATED shelter nearest to the meteorological station. I didn’t realise that I was so hot that my body heat could influence temperatures measured on the Antarctic Peninsula, thousands of kilometres away. It must have been Andy!!!

But--trying to be serious a moment--if you click through the link Tony provides (at "most populated place") and you'll see that the great cities of the Antarctic Peninsula amount to a couple of hundred guys who mostly come by for the summer months and then leave.  But it gets harder and harder to be serious around Tony and WUWT.

I always thought that Al Nino was to blame, now you're telling me it's Andy.

I had to click on the link to WUWT to makes sure this story was not a hoax. Watts actually wrote that!! I still have problems believing it.

How many posts did this guy write on the urban heat island effect and he still does not know anything about sky view factors, storage of heat in high rise buildings and changes in Bowen ratio.