Kenney Defends The Government Re The Roma

An excerpt from a Jason Kenney interview, where he justifies the Canadian gov's  stance re Hungary's treatment of the Roma:

I have repeatedly condemned those voices of intolerance and xenophobia and continue to so as I did when I was in Hungary, in part expressing my solidarity with those in the Roma community who face discrimination and who are targeted by this kind of xenophobic rhetoric... That's why I ... went out to a small Roma village and met with people, went to a Roma school ... met with grassroots from community leaders in Miskolz ... I would point out that the designation of a country of origin in our asylum system is not, as you suggest, some kind of a -- it doesn't offer a country bragging rights.

We continue to say that Hungary and the central European countries must do much more to integrate and protect the Roma and other vulnerable minority communities. That doesn’t change.

Well, shit, I've condemned all sorts of people in my time.  I've even denounced them.  For example: 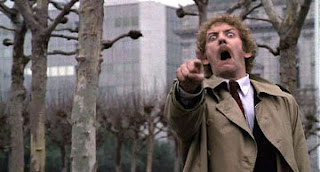 (Yeah that's me.  With my hair long Donald Sutherland looks a lot like me)

...but the point being, once I did all this denouncing nothing changed.

So Kenney did a bunch of denouncing.  What if nothing changes in Hungary?  That country still gets 100% of the benefits of being a "safe country" whether of not they do anything to make their country safer for their Roma (or Jewish for that matter) minority.  Maybe they don't get "bragging rights", but they still get Canadian $ in any Canada/EU Free Trade Deal.

Posted by bigcitylib at 6:04 PM