Apparently, the twitter account @ChiefSpence does not belong to Chief Spence; Ezra spent a whole day trashing the wrong person.  They're not too happy about it either.  Meanwhile; fellow Sun TV personality Michael Coren...unchained.  I sense another CBSC complaint in the making. 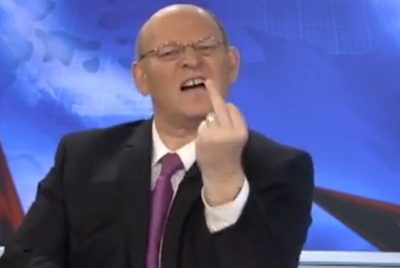 Posted by bigcitylib at 6:18 AM

I believe in free speech and would die to defend if need be. But in this case it’s not free speech it’s hate speech, it’s hurtful and it’s derogatory. Everyone should be allowed to say whatever they want in a free, open and democratic society. But if what you say causes hurt and harm it should be banned. You can’t yell “fire” in a crowed movie theatre cause it would cause panic and harm to someone.

Far be it from me to defend this zealot but something in the editing simply does not ring true. That said its certainly not beyond Coren's modus operendi

Max. There's an edit in the middle; the sound track may have been added, though the gestures are his.