As Conservative Senator Bob Runciman pointed out in a news release, that approval [for a complex at Ostrander Point], like so many others, was granted against local wishes. The project also “threatens migratory birds and bats and it makes no sense from an energy standpoint,” the senator said.

Runciman points out that another wind farm in a designated important bird area, Wolfe Island, has a kill rate for birds and bats “that is seven times the industry average in Canada, primarily because it is located in the wrong spot.”

The actual number counted between July and December of 2009 at Wolfe Island was 602 birds, which may or may not be higher than the industry standard.  Nevertheless, ornithologists tend to be unmoved by such figures.  To keep things in perspective (from a flap.org news release):

An Estimated 14,000 Migratory Birds Die Every Day in Toronto

“One to ten birds die per building, per year in Toronto alone,” says Michael Mesure, Executive Director of FLAP. “Currently, over 940,000 registered buildings in this region pose this threat.”

Here's a collection of just a few of them: 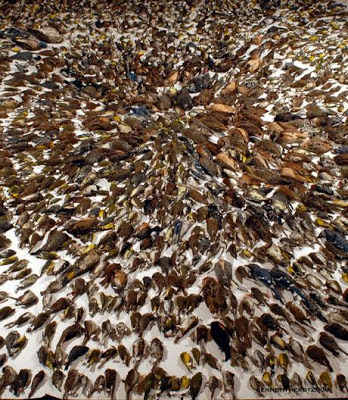 Now, in regards to the project at Ostrander Point: you can see what Gilead Power (the project developer) has to do to ameliorate the effect of their turbine farm here.  Furthermore, I've written earlier about the set of requirements that Grand Valley Wind Farms Inc. was made to follow to build nine wind turbines in the Township of East Luther Grand Valley, and the situation with Ostrander Point strikes me as similar:

The restrictions seem quite elaborate, and involve "more than mitigation measures or “replacing” what is lost", for example providing and maintaining....habitat on nearby [project developer] owned land and timing construction activity to avoid the...nesting season.

I would note additionally that some anti-wind folk appear to believe that the turbines at Ostrander Point will have a negative impact on the local population of Blanding's Turtle.  Of course they won't; it's the roads that must be built to service them that are the problem.  Turtles like roads; they like to sun themselves on them, to cross them, and to lay their eggs in the loose gravel alongside of them.  Hence the speed bumps and signage noted in the regs, and the limitations on when construction and road maintenance can take place.

Posted by bigcitylib at 9:22 AM