Global Warming...Its Not Back Because It Never Went Away!!!

AGW (Anthropogenic Global Warming) is a long-term upward trend in global temperatures overlain upon natural climatic shifts. So, for example, one of these natural shifts is La Nina,

...the name for the cold phase of ENSO, during which the cold pool in the eastern Pacific intensifies and the trade winds strengthen. The name La Niña originates from Spanish, meaning "the little girl", analogous to El Niño meaning "the little boy". It has also in the past been called anti-El Niño.

Now, one of the more pernicious myths spread by the AGW Denialist movement has been that climate scientists did not anticipate the relatively cooler temperatures of the past two years (but only relatively cooler--even 2008 was one of the 10 warmest years on record, and '09 is tracking to be somewhat warmer than '08).

This is not the case. As far back as August, 2007, scientists at Hadley Centre in Exeter (U.K.) were forecasting chillier times ahead, and sourced La Nina as cause:

[Their] forecast...reveals that natural shifts in climate will cancel out warming produced by greenhouse gas emissions and other human activity until 2009...

Climate scientists say the new high-precision forecast predicts temperatures will stall because of natural climate effects that have seen the Southern Ocean and tropical Pacific cool over the past couple of years.

The "tropical Pacific cool" noted in the last paragraph above is our La Nina.

So far so good. But that's not the end of the story. The flip-side to La Nina is the more familiar El Niño, La Nina's warm water counterpart. The effects of El Niño on global temperatures are well known to scientists. For example, in 1998 an extremely intense El Niño gave us 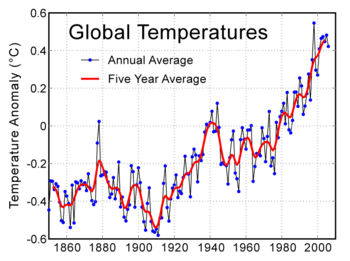 ...the spike on right side of the above graph which, depending on your data source, indicates the warmest or 2nd warmest year on record.

Now here comes the good part. Several months ago, talk of the next El Niño event began perculating on some of the climate science blogs, because there hasn't been one in awhile and they tend to follow La Nina events.

And, from today's Fiji News:

THE signs of a developing El Nino have strengthened in the past two weeks, says Meteorology Department director Rajendra Prasad.

As of June 17, Mr Prasad said rainfall was well below average at all observation sites, except Rotuma and Ono-i-Lau.

So lets do a full circle and return to the Hadley Center forecast from 2007:

...but from [2009 on], temperatures will rise steadily. Temperatures are set to rise over the 10-year period by 0.3C. Beyond 2014, the odds of breaking the temperature record rise even further, the scientists added.

Some have wondered whether the momentum towards action on the AGW issue could be sustained over a short stretch of less steamy weather, and indeed a few polls have shown less public support (esp. in the U.S) for the kind of actions scientists have called for.

You can't help but wonder if the negotiations leading up to Copenhagen could have come at a less fortuitous time.

Posted by bigcitylib at 7:08 AM

Make that credible source, not "Al Gore/Jim Hansen/Gavin Schmidt/Mikey Mann said it one of his speeches!". Some real science.

None of the satellite data sets support your claim.

And mankind is responsible for this so-called warming...why? Do refresh my memory please.