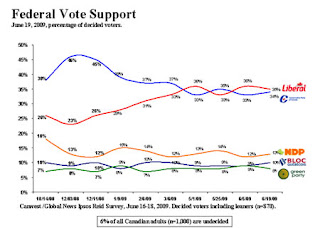 Iggy got buffeted in the press this week, and it looks like its shown up in the latest polling numbers (although its all within the margin):

I suppose the problem with convincing everyone that the timing of the election is in your hands, is that you might get blamed for (almost) precipitating an unpopular election. That's my 1st take on these numbers, if it isn't a matter of interpreting twitches. Again, once in a campaign, I doubt anyone will care who started it, esp. if its a more conventional fall election.

Posted by bigcitylib at 9:08 AM

Take a look at the CROP numbers in QC released today:

Thank God we didn't have an election then William. Wouldn't want to gain any seats in Quebec now would we.

James, I toured my riding last week, NO ONE was in for an election, including most of my volunteers...patience - wait for the fall...

Patience everyone.... while we wait for the total degradation of democracy into fascism.

The Quebec numbers are heavily skewed because of the very high concentration of support in Montreal. Outside of the city, the Libs numbers tank.

Sorry Fred, 36 BQ 31 Lib in Francophone QC which means that most federalist ridings (townships, 405 south shore, Quebec City, outaouais) are all red now. Might be tight, but they are red...

Hey, at least Harper's still ahead of the Greens in Quebec.

It's the next few months that will be the most telling and have me the most worried.

Harper traditionally does better when parliament is not sitting and no one is attempting to hold him accountable.

The Con spin machine will be in high gear and if the Iggy bashing attacks are going to start having an affect this will be the time.

Do we have a plan other than barbaques?