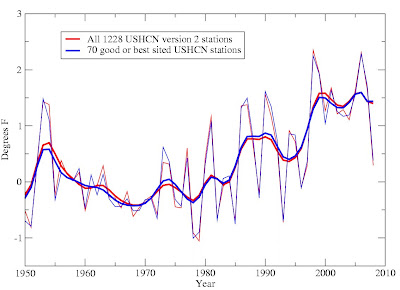 In this document, the National Oceanic and Atmospheric Administration (NOAA ) discuss the effect of poor station siting on the U.S. temperature record. Employing information gathered by Anthony Watts and Co. at Surface Stations, they conducted the following experiment:

Two national time series were made using the same gridding and area averaging technique. One analysis was for the full data set. The other used only the 70 stations that Surfacestations.org classified as good or best. We would expect some differences simply due to the different area covered: the 70 stations only covered 43% of the country with no stations in, for example, New Mexico, Kansas, Nebraska, Iowa, Illinois, Ohio, West Virginia, Kentucky, Tennessee or North Carolina. Yet the two time series, shown below as both annual data and smooth data, are remarkably similar. Clearly there is no indication for this analysis that poor current siting is imparting a bias in the U.S. temperature trends.

Now, Anthony and McIntyre are bitching about Anthony's not being cited by name, but Mr. Watt's report...

Watts, A. (2009). Is The U.S. Surface Temperature Record Reliable? Downloadable from here,

...does not contain any of the kind of analysis performed by the NOAA. So it would have been of no use to such an analysis. It looks as though the material used was pulled directly off the SS site. Note the ref. to "70% of the 1221 stations " having been surveyed. This is from the yet to be updated homepage to the site.

In any case, you can't blame the NOAA for performing an analysis Anthony Watts has been unprepared to go forward with. At this moment, accroding to his Watts Up With That website, 80% of the U.S stations have been surveyed; he promised to start work on his own time series analysis at 75%. And yet there's still nothing been done. Why, Anthony, why?

(Hint: He knows he'll get the same answer as the NOAA.)

Posted by bigcitylib at 9:38 AM

Oh, yeah? Well why is the World cooling then?

NOAA . . billions of dollars in their budget, thousands of staff and they don't even know how many reporting stations they have.

Suppose we shouldn't be surprised after the huge stinker of a climate hysteria report they published last week.

That was really, really bad.

This is a favourite trick of the faux-informed. You have to be really stupid to think anyone other than the derelicts at the end of the bar will far for it.

Keep marginalising the male of the species, Fred.

Interestingly, no matter what data goes into the temperature record; all stations, flawed stations or just 70 stations, the graph is exactly the same.

The Climate Reference Network can't get up and running soon enough.

Its a conspiracy! A conspiracy I tell you! And Al Gore is fat!

Interestingly, no matter what data goes into the temperature record; all stations, flawed stations or just 70 stations, the graph is exactly the same.

Stop holding yourself there and look closer. It's not exactly the same.

No, no conspiracy BCL, but definitely some mania involved.

And trying to fathom how Canada will reduce our CO2 emissions to pre-Confederation levels will be most interesting to watch.

Darn you ti. You got me again with another of your brilliant zingers.