Our Guy Is Way More Handsomer 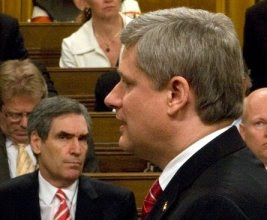 How can anyone look at this picture and think otherwise? I mean, Harper has barely any neck. And, what, is that a haircut or did somebody mow his head?

Posted by bigcitylib at 4:52 AM

Email ThisBlogThis!Share to TwitterShare to FacebookShare to Pinterest
Labels: Iggy vs. Harper

And he (Harper) has what many would term a "dick nose"... Of course, we don't call him "Tricky Dicky North" for no reason...

And his hair changes colour, too!

Why, when he was on Fox on Friday, it was chestnut, not grey.
Oh, that fickle Stevie.

And to think - he's has a makeup lady to look like that - did anyone ever determine if taxpayers pay for his beautician? I thought the NDP were looking into it way back.

Glad to see you guys focusing on the crucial aspects of Canadian politics.

Oh, Joanne - lighten up. There should always be a moment in every day to look at the fun side of life - otherwise, we'd all be suicidal.

Oh, I forgot - Cons don't have any fun and don't have a sense of humour. Sad way to live.

Maybe we should have them wrestle for the position of PM....

Ahh Joanne, stop proving that Connies have no sense of humour....

Considering half the people on Joanne's site call the Leader of the Loyal Opposition "Iffy", I hardly think she is one to come over here and start moralizing.

Why, I am pretty darn sure Joanne participates in the juvenile insults going on over there too. Not to mention the endless rants and hair pulling over that horrible biased media (bias being defined as anyone who dares to show anything negative about Harper). And, speaking of important issues to the future of Canada, I am willing to bet there are more than a few comments about Igntieff's eyebrows, Dhalla's caregivers, and Raitt's former aide's father.

Why, if you were to go over there rights now you would see such gems as "Iggo-Waffles" authored by our resident school marm here.

Some people need to look up the word "hypocrite".

"Maybe we should have them wrestle for the position of PM."

Thanks - it will take a few days to get that image out of my head.

Besides, I am pretty sure these two would prefer chess.

This is another example of why Liberalism is a mental disorder . . . vote for someone cause he looks good . . . to you.
Iggy has spent his life going to school . . . has never had a real job!!! And you think he could run a country. Look at the amature south of the border . . . just spent most folks great-grandchildren's money and even their offspring won't be able to pay it back.
EI . . . the left designed the present rules . . . now they want to change them.
Liberals neglected the Nuclear industry for decades . . . while Euro countries built reactors for clean energy . . . Canadian Liberals were raiding the treasury and giving it to their friends in Quebec.
80% of Canadians don't want an election . . . if Iggy and his Kabal buddy nutty Jack cause one . . . they will lose again . . . would Iggy then go back to Harvard???

Wow OS, that was original?

61% of Canada's electricity comes from hydro. We didn't have the urgent need to start building nuclear reactors the way the Europeans did.