The Elephants Of Florida 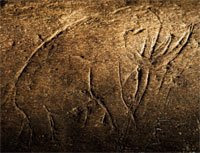 In what a top Florida anthropologist is calling “the oldest, most spectacular and rare work of art in the Americas,” an amateur Vero Beach fossil hunter has found an ancient bone etched with a clear image of a walking mammoth or mastodon.

A long, wonderfully detailed story--and two crappy photos, of which this one is the better.
Donna Braginetz offers the following observation on the Dinosaur Mailing List:
The legs are drawn with tremendous sophistication -- more so than the head. Plus, the animal is doing a proper elephant pace -- legs on the same side of the body moving in unison. One could imagine that the artist had lots of experience being very close to the living animals.
Additionally, I can't help but notice there don't seem to be any weapons depicted and none mentioned in the article. Who knows -- maybe this is actually an example of one individual's fascination with an animal's form(an artistic exercise) rather than the standard hunting narrative (recording an event, evoking magic, or celebrating a kill).[Bald sociological speculation over.]

Go to any Walmart in Florida and you'll see herds of elephants roaming free.