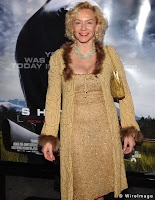 Last night, NDP Star candidate Lenore Zann won the NS riding of Truro-Bible Hill by a good 18% point margin over her Liberal opponent. As you may know, early in the campaign, Lenore, who has starred in such movies as Def-Con 4 andVisiting Hours, suffered a Liberal Party instigated smear when topless photos of her from the tv series The L-Word were leaked to a number of NS media outlets. Party leader Stephen McNeil eventually apologized, but perhaps this set the notion of NS Liberals as scuzzy operators in the public's mind.

In any case, Ms. Zann overcame adversity to triumph in what was previously a Tory strong-hold. Congratulations, Ms. Zann! And, just to say it so it has been said and need never be said again: awesome rack, sister!

susansmith said...
This comment has been removed by the author.
7:42 AM

Politics is a stupid sport.

I hate the NDP position philosophically, but in this case, I'll say, "good for her".

People here didn't vote for Lenore - they voted against the Tories and they voted for who they thought would win so that Truro-Bible Hill would get more money for roads.

Lenore's backbench material and that's it. Anyone who's met her knows it to be true.

BTW - everyone in this area knows about her acting past. Neither it nor the idiot in Halifax's leak had much to do with the election on the ground.