Best Band in The Land 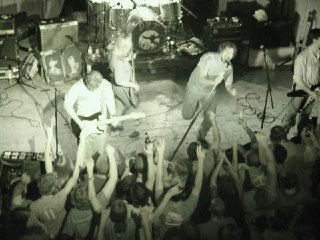 How to describe the Drive by Truckers?
.
Sonically, they range from "alt-country" to the kind of noise Steve Earle might make if he found a couple of Neil Young's guitars from the "Ragged Glory" sessions and embraced feedback. Their seventh album, A Blessing and a Curse is due to drop on April 18th and, since a few songs have begun turning up on the P2P networks, I thought I might take a break from reaming out Tories and write a bit of an appreciation.
.
The core of DBT is a three guitar attack a la Lynyrd Skynyrd, and no less than three great song-writers. The head Trucker is probably Patterson Hood, who looks a bit like Warren Oates from Peckinpah's "The Wild Bunch". 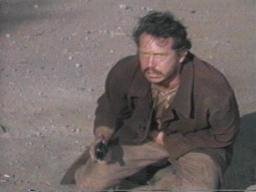 Hood's songs are stylistically all over the place within the general "roots rock" framework. His lyrics are straight-forward yet highly poetic, and the whole rolling package is tied together with a voice that is, let's just say, gravelly as all hell. A kind of "Springsteen of the South", in other words.
.
It was finding one of Patterson Hood's tunes on Napster that really turned me into a DBT fanatic. The song was "Let There Be Rock" from Southern Rock Opera, and its about a young Alabama boy whose dreams of seeing Lynyrd Skynyrd are dashed by that fatal plane crash. 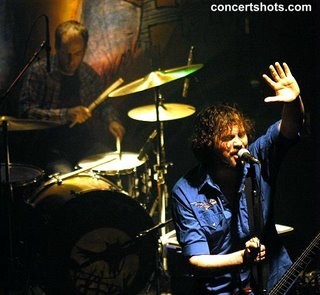 The song concludes with a list of the bands our boy did finally get to see, all of whom (it turns out) were later struck by tragedy in one form or another:
.
So I never saw Lynyrd Skynyrd but I sure saw Ozzy Osbourne with Randy Rhoads in 82
Right before that plane crash.
And I never saw Lynyrd Skynyrd but I sure saw AC/DC
With Bon Scott singing, "Let There Be Rock Tour".
.
This really struck a chord for me (no pun intended) the first time I heard it. For one thing, it clued me into the fact that Patterson Hood must be around my own age (Fortyish). Even more importantly, it made me think back to the days when I was desperate to see AC/DC. They were just breaking big at the time, and were scheduled to open for (if I remember correctly) Van Halen. But then Bon Scott died of alcohol poisoning in that car and I ended up watching some pack of assholes from Seattle in pink spandex. 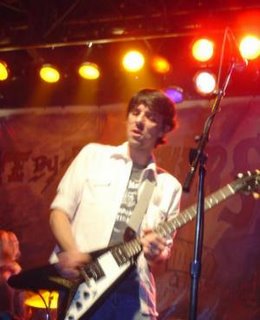 Patterson Hood's long-time band-mate is a guy named Mike Cooley (pictured left), who looks lean as a stick of beef jerky. He handles alot of the band's lead-guitar duties. Cooley doesn't do as much writing as Hood, but there's not much in the way of filler in his own catalog of songs. One of my favorite tunes of his, also from Southern Rock Opera, is called "Zip City":
.
Your Daddy was mad as hell
He was mad at me and you
As he tied that chain to the front of my car and pulled me out of that ditch that we slid into
Don't know what his problem is
Why he keeps dragging you away
Don't know why I put up with this shit
When you don't put out and Zip City's so far away
.
Another great Cooley tune is "Marry Me" from the follow-up to Southern Rock Opera, entitled Decoration Day, which contains one of my favorite lines from the band:
.
Well, my daddy didn’t pull out, but he never apologized
Rock and Roll means well, but it can’t help tellin’ young boys lies.
.
I guess sometime around Southern Rock Opera Patterson and Mike decided they needed a third full-time guitarist to h 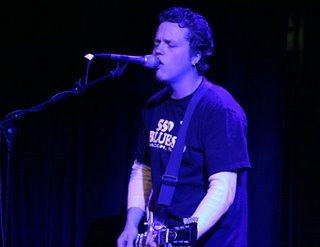 elp bring the noise, and found "the kid" Jason Isbell, who also plays lead and (at least I think its him) some nasty slide guitar. As it turns out, Jason can write as well! His tunes tend to be a bit poppier then his bandmates' (I detect strains of Tom Petty in some of them), and are probably the band's best hope for any kind of Top 40 success. One of my favorites is "Goddamn Lonely Love" from The Dirty South. It is beautifully played, beautifully sung, and goddamn poetry:
.
Stop me if you've heard this one before:
A man walks into a bar and leaves before his ashes hit the floor.
Stop me if I ever get that far.
The sun's a desperate star that burns like every single one before.
.
Rounding out the band are Shonna Tucker on bass and Brad Morgan on drums.
.
As for the stuff I've found from the new album through Limewire, it doesn't look like DBT has lost a step at all since The Dirty South came out in 2004. "Aftermath U.S.A." sounds a bit like the Stones crossed with The Faces, "Gravity's Gone" features Cooley and (I think) Isbell wailing away on slide.
.
Finally, if you ever get a chance to see these guys live, do it. They play a good, long time; the three guitars can blow out walls two clubs away; they solo like mad things; and (unlike many bands these days) they look like they enjoy their work.
.
I've just ordered their DVD Live at The Forty Watt. I've got a buddy whose marriage has just gone South on him, who's moving out into an apartment. He's planning one last poker party for his buddies where we'll get drunk, play this DVD, and trash the house before he leaves for the last time. The Drive By Truckers make music that's perfect for that kind of occasion.
.
Find out more about the band www.drivebytruckers.com.

Posted by bigcitylib at 4:18 PM