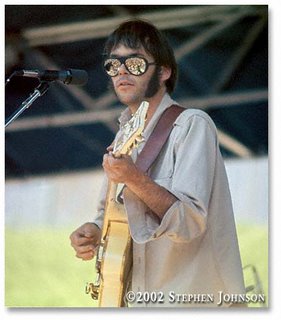 I am amazed at how much ink the news that Neil Young has penned a whole new album of "folk metal" anti-war songs is getting, but I guess if you manage to get the "right wing blogosphere" pissed at you it's worth a couple of weeks of free publicity.

I am a long time Neil Young fanatic, and am mostly happy about this news, but a bit anxious as well. His last stab at political music, "Let's Roll", let's face it, sucked monkeys. But the new album, called Living With War, has long-time collaborators Chad Cromwell on drums, Rick Rosas on bass, and Tommy Bray on trumpet. A "power trio" with trumpet, in other words. And one of the tunes is entitled "Impeach the President". Interesting. Or bizarre.

Anyway, just for the hell of it, here's my list of Neil Young's various gestures towards protest music. If anyone else has others to add, go for it.

A classic. If you can, try to find the Live version with Buffalo Springfield. Neil's solo in the middle puts it right over the top. It's on Journey Through the Past, which is mostly awful, so you might try to download it as an individual tune from the P2P networks.

Anyway, Ronnie Van Zant from Skynrd and Neil eventually became great friends, and Neil was one of the pall-bearers at the singer's funeral. Interestingly enough, Neil wrote the classic "Powderfinger" for Lynyrd Skynyrd, but that big ole plane went down before they had a chance to record it. The history of their relationship can be found here at the website of The Drive-by-Truckers, one of the great musical heirs of both Neil and Skynyrd.

Not really sure if this one counts as political or not, though it does mention Nixon a couple of times in the chorus. Probably one of the prettiest, saddest songs ever written, it contains the lines:

This album was made in the early eighties during Neil's "Reagon" period. There are any number of countryish salutes to the American Working Man and a hawkish foreign policy, as well as a few weird nighttime pieces like "Captain Kennedy". Strange but very beautiful. One of his most under-rated records.

Let's Not. Sucks monkeys. What can I say.


So, what have I missed?

"Rocking in the Free World" has become a statement song. I remember seeing Neil perform that song with a somewhat drunk Eddie Vedder. It was classic.

Was that the tour with Pearl Jam, Soundgarden, and Blues Traveller?
I remember seeing that at the Ex, and finding a six-pack someone had stashed under a tree. It doesn't get any better than that.

Yes, at the Ex. I forgot about Blues Traveller. At the end of Neil's set Vedder came out with a bottle of wine in tow and they did that song.