Camus vs. Beowulf on the Atheistic Lifestyle 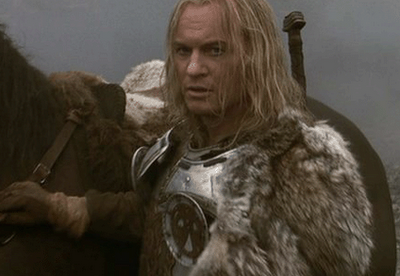 Rabbi Marc Goldman is trying to understand Atheism. In this weeks edition of Newsweek, the good Rabbi writes, among other things:

To be called to a level of goodness and sacrifice so constantly and so patiently by a loving but demanding God may seem like a naive demand to achieve what is only a remote human possibility. However, such a vision need not be seen as a red flag to those who believe nothing. I can humbly ask whether my atheist brothers and sisters really believe that their lives are better, richer and more hopeful by clinging to Camus's existential despair:"The purpose of life is that it ends."

Mr. Goldman clearly does not realize that there are several models available for the Godless life, some of which are a bit more full-bodied than the one he makes note of in the passage above. A relatively exciting version, for example, can be gleaned from the pages of the Anglo-Saxon Epic poem Beowulf.

Now, Woody Allen once advised would-be college students to "avoid any class where they make you read Beowulf", and this still holds good today. However, if you are, for example, bent on an English degree and the sad task cannot be avoided, you will do far worse than to get hold of the new(ish) translation by Nobel prize winning poet Seamus Heany. Unfortunately, this volume was not available in my day.

In any case, when I took Beowulf at the University of Victoria, my professor spent alot of time over the Anglo-Saxon concepts of "Glory", "Reputation", and "Fame" which played so great a role within the world of the poem. For the Saxons were an extremely materialistic people, and according to them all that remained of a man after he died was his "reputation", ie. the "glory" and "fame" that had accumulated around his name during life. Furthermore, a deadman would be remembered for a span of years that was in direct proportion to the "amount" of these properties that he had acquired while living.

"Glory" and "Fame", then, were a kind of fuel that launched a man's name across History until, metaphorically, the tank was empty, and it crashed to the same Earth in which his body lay, and he was forgotten. An enduring reputation was as close as the Saxons could imagine to an Afterworld.

It is for this reason that the character Beowulf spends much of the poem running around looking for monsters to slay and feats of strength to perform. He is literally gathering points against his death, so that his name might afterwards ring out through the ages.

And in this seems to lie a fairly robust Atheist credo: live a full life, because you only have one and it is all you will be remembered by.

Of course, it isn't as though I personally embody this credo. I like sitting around in front of the television too much. But, as my parents always told me, do what I say, not what I do.

Posted by bigcitylib at 9:12 AM

Warning: If you would like to make big money doing only 30 minutes per day of the easiest work you've ever done... Without having to leave your home, talk to anyone or sell anything... Then READ the following message to find out more... The AntiBusiness

Check this out for FREE...

"Your Ad" Will Be Instantly Displayed on Thousands of Websites and Read By Over 10 Million People Per Week For FREE, and It Only Takes 60 Seconds To Get Started!