Don Mills and Don Mills Center: Some History and Pics

It is interesting that Don Mills Center, slated for demolition in May (unless some last minute begging and pleading by local residents and city councilors changes a few minds, which I doubt), should come to such an ignominious end after such bright beginnings.

You see, the town of Don Mills, when it was developed in the early 1950s, was one of Canada's first planned communities. It was supposed to be, according to the newspapers of the time, a fully developed satellite community of about 6,000 souls that did not attach, "fungus like", to the body of the central city. In other words, it was meant to be self-sufficient, with both Residential and Commercially zoned properties in close proximity, the idea being to avoid becoming one of the sprawling "bedroom communities" that were springing up all over the place at the time.

The town outlines can be seen on the map below (dated about 1954-1955), with Don Mills Center occupying the lower right corner of the cross-within-a-circle near the middle of the map. (Incidentally, I noted in a previous post that the current population in the area is heavily slanted towards senior citizens. Many of these are located in multi-residential buildings on the left edge of the circle). 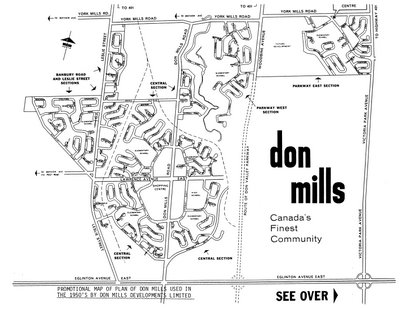 And Don Mills Center was meant to be something more than a mere shopping center. Architecturally, it took its cue from the concept of an Agora, an open space at the center of many ancient Greek cities. There's a picture of the interior below, from about 1967: 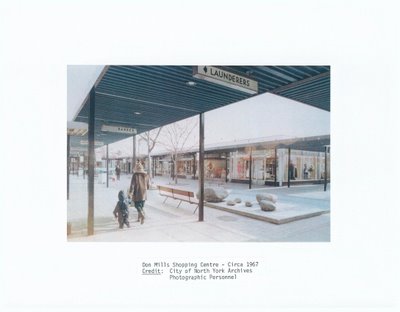 Note that the mall is open to the elements with canopies above the store-fronts, the point of this being to simulate the row of shops on ground level of a typical city street. Don Mills Center actually won a governor General's Award for architectural design in 1955.
.
In fact, the mall was the not the only structure on site with aspirations to architectural distinction. Bet you can't guess what the structure at the South end of the picture is. 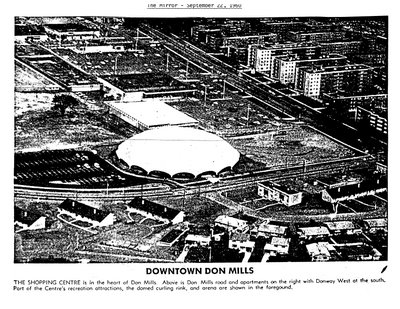 If you said a curling rink, you would be right. This structure was torn down in 1986, and was replaced by a four story office building.
.
Unfortunately, in 1970 Fairview Mall up on Sheppard Avenue opened and, as winters were a bit harder back then, many people decided they enjoyed shopping under a proper roof. Sales stagnated until, in 1978, Don Mills Center was renovated and covered over, losing many of its unique architectural features in the process. So it goes.

Anonymous said...
This comment has been removed by a blog administrator.
12:03 AM

Anonymous said...
This comment has been removed by a blog administrator.
12:04 AM

Anonymous said...
This comment has been removed by a blog administrator.
12:05 AM