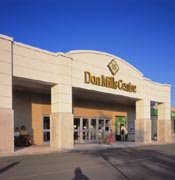 I've never really had any particular warm feelings towards Don Mills Center, though I've probably walked through the place several thousand times in my life. It is still a bit weird to watch everybody pulling out in advance of its closing down and falling to the wrecking ball in May, to watch people line up to strip the last items off the racks in this or that clothing store. It's a bit like pirahnas removing flesh from a floating corpse. Not that I haven't done my bit. Thus far I've scooped up a half dozen Dilbert books for $5.00 a pop at Coles, and a nifty windbreaker from a place called Barclays for under $30.

For me, the highlight of Don Mills Center was a neat little bar called "Joe Bird's" (next to Diana Sweets), that was about the size of a phone-booth and a particular favorite of the local posties. And my wife and I used to visit Diana Sweets occasionally on mornings when she would teach skating at the rink next door. It was like a scene out of Little Old Lady Land, with all these elderly English types coming in for breakfast.

In fact, Don Mills is surrounded by senior's residences of one sort or another. Visit during the lunch hours and it was like everyone was pushing walkers. Until recently, that is, when technology improved and you would see 100 year old women driving electric wheel-chairs that could outrace a horse.

It's these people who will have the most trouble when the place is gone. Demographically, there is a ring of elderlies living around the mall (on The Donway), and for the next couple of years (until the new facilites are up), their main source of goods, services, and Community will be a big smoking hole in the ground. Furthermore, the new structure will be open-air, designed to simulate the main streets of a small town, and I can't imagine that an elderly population will appreciate this during the winter months.

I've actually got some historical photos and plans of the mall that I will try to post and comment on over the course of the next couple of weeks.

Posted by bigcitylib at 2:16 PM