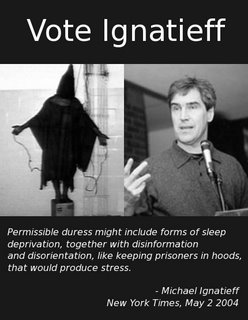 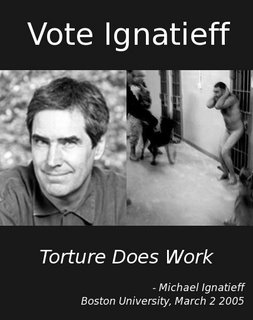 Now, to me, Iggy's recent "clarifications" of his position on torture seem to me to indicate that he was for torture before he was against it. But put that aside, I can just see him debating Stephen Harper:

Harper: It appears that Mr. Ignatieff, like myself, supported of our allies with regards to the Iraq war. However, my own position in regards to torture has never been ambiguous.

Liberals: don't like what I write on Iggy? D'you think the Tories will be any nicer? Do you want to fight the next election on the issue of whether or not your party leader was partial to the nut-cruncher?

Posted by bigcitylib at 6:58 PM

Read his book and you get the idea of what he's talking about.

He said we need to outlaw torture out right, because it was a violation of the rule of law.

But what should we do should there be a neculear bomb hidden somewhere in the city and there isn't enough time to evacuate the city. Then he suggesed a few thing which could in theory be allowed under the rule of law.

He used to teach the Geneva Convention to American Soilders so I don't think we should worried about torture.

BigCityLib strongly dislikes MI. I'd normally not come spam his board just to disagree with him, since he seems very firmly set in this view, but the whole "3 strikes" business is pretty farcical when he was dead set against the guy from day one.

I think we'd have a more effective and less rancourous leadership process if everyone concentrated on demonstrating why (whichever leadership candidate they eventuallys support) is the best choice for Prime Minister. However, blogs are all about freedom of expression, so that's just my two cents.