Because politics can be depressing, and Science wonderful, today's post will concern the most interesting tale from the world of Archeology that I've heard in awhile.

There is a hill outside of Visoko, Bosnia-Herzegovina, known as Visocica, the shape of which has long been considered unusual. Specifically, it has relatively flat, 45-degree slopes pointing toward the cardinal points and a flat top. The local residents have long wondered if human hands might have played a role in scultping the hill. 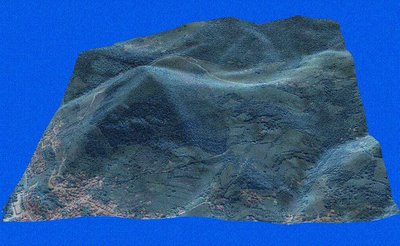 In 2005, an amateur archeologist named Semir Osmanagicm visited Visoko and discovered that the sides of the hill were aligned with the four points of the compass. After further work he claimed to have uncovered "stone tiles" and an "entrance" into the hill. His theory was that a step-pyram

id 220 meters high, or 80 meters taller than the Great Pyramid of Egypt, was buried under Visocica. To get an appreciation, compare the town of Visoko in the foreground of the picture left with Visocica Hill behind it.

Now, the strangest thing here is that this whole story does not appear to be a hoax. Even though Semir Osmanagic is considered a bit of a "mysterious character" by the archeological establishment, the dig currently ongoing at the site has been turning up more and more evidence for his claims: walls made of cut stone cubes, entrances to tunnels, and so on. Furthermore, satellite photographs and thermal imaging revealed two other, smaller pyramid-shaped hills in the Visoko Valley. And as the evidence seems to mount, the story of what may be Europe's first pyramid is being picked up by mainstream publications like the Washington Post.

Now, assuming this continues to play out as legitimate science, the discovery of the Bosnian Pyramid is one of those events that will literally rewrite world history. So far the best theory is that the Illyrian people, who inhabited the Balkan region before conquering Slavic tribes overran them about 1,400 years ago, had the sophistication to shape a hill into a pyramid.

More information on the Bosnian Pyramid can be found here at the official website.

One of those WOW! moments, frankly. And even wilder is that that Spanish guy in Alien Vs. Predator may turn out to have been a Prophet (before he got eaten)!

Update, 7:21 pm: Well, certainly critics have emerged, and their claims can be read here. Their main claim is that the Visocica once housed old settlements or perhaps a medieval necropolis, and that Osmanagic and his "team" are basically trashing a legitimate archeological site in search of an non-existant pyramid. Given that Osmanagic has a thing for Indiana Jones, and has dated the pyramid to 12,000 BC, they might have a point.

Here is Cnn's take on the story. They are taking it very lightly.