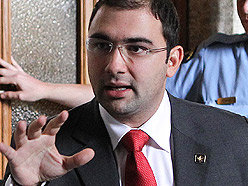 They're scanning your Facebook Page; they're checking out the bumper stickers on your car. You got the wrong political "ties" some sweaty, unshaven guy from the alleged Greek mafia comes along and boots you out of the CPoC rally.  I suppose that's alot easier than trying to convince you to vote for them.

PS. As a few people have noted, Harper and Co. spend more time vetting the kids that show up at their rallies then they do their closest advisers.

Posted by bigcitylib at 7:57 PM

That picture... One can just imagine Dimitri Soudas personally ejecting the Liberal and NDP moles for fear of them corrupting the Harper Youth.

Item #3 - Student arrested for crossing parking lot amidst Harper Youth while not being Con supporter.

http://www.guelphmercury.com/news/article/512059--vote-mob-stages-surprise-party-for-harper
Several of the peaceful mob participants had registered to attend the Harper event, but they were turned away by RCMP officers. Cara Dawson and Izzy Hirji were among those asked to leave the venue.

A Conservative Party of Canada official approached them and indicated they were not welcome because of their involvement in an action that was perceived as a protest by party insiders. Dawson and Hirji tried to explain that it was not a protest and that they had registered to attend the campaign event, but the official could not be persuaded.

RCMP Cpl. Tony Fowler of the “O” Division/VIP Security Section told the students the event was by invitation only and they would have to leave. Outside the venue, Hirji said because he and Dawson had exercised their democratic right to express themselves in a peaceful fashion, they were barred from entry.

I presume that if I wear a brown shirt with a certain arm band on it I will be very well received.

Hi, Some one from facebook refereed your link i have book marked it nice blogs you write see Free Adwords Voucher here