Ontario Still Not There For CPoC Majority; Masturbagate Still Non-Story 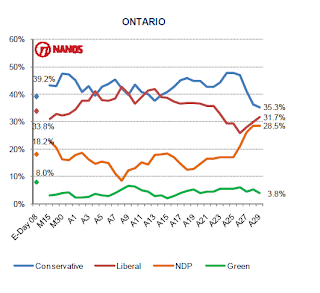 NANOS shows the NDP down a bit; the CPoC up a bit, but not in Ontario, where they need to be if they want their majority.   Because who cares how high they soar in Alberta, as long as the people out there only get to vote once?

As for Jack's visit to the alleged "rub and tug"; I suspect if anything the story will only work to his benefit, this late in the game.  People will see that the CPoC (and of course we all know this stuff originated with the CPoC) is getting desperate.  Remember the Rob Ford campaign.  At a certain point, the stories about Ford's improprieties were all dismissed as the kind of garbage you would expect under the circumstances.

And in the end, this story is roughly equivalent to Jack's getting pulled over at an intersection where people often speed, but  found to be not guilty of speeding.

1. Address of the establishment.
2. Red and Green lights in every room.
3. Getting a rub by a 20 something girl and he's naked.

Yeah right. Just like he woke up in a private clinic and didn't know it.

But this just shows how far left Liberals have gone. Now you're starting to stick up for the NDP.

P.S. This must be a dark day for Liberals. Even their very own newspaper endorses the NDP.

Who knows. The Conservatives tried to give doctored photos of Ignatieff to the Sun, but who in their right mind thinks this story would hurt Layton?

With all the crap that's been going on (doctored photos, the campaign to make Gerard Kennedy look like a lazy bum, this story), this has to be one of the worst elections in living memory.

Who indeed. The errors are also so wide in the regions....

To be fair, they're really vague about this in the article, that's the description of the place when it was raided, which was before Layton was there. The police found Layton there on a follow-up visit after the raid.

PK seems to know a lot about how to get a rub & tug. Just sayin.

double nickel . . . I was in the next room when the lights changed from green to red.

The Conservatives tried to give doctored photos of Ignatieff to the Sun . . . the photo wasn't doctored. It was just someone who looked like Iggy.

that's the description of the place when it was raided, which was before Layton was there. The police found Layton there on a follow-up visit after the raid . . . the raid was a week later. 1 week.

Naive, young prairie boy goes to the city, ends up working at a Toronto rub & tug. Forget politics PK you've got a hit movie there. ;)

sharonapple88 said...
This comment has been removed by the author.
11:24 AM

the raid was a week later. 1 week.

Really? They didn't give the date of the raid in the article.

Anyway, just when the Liberals need attention, here comes this.

Massage-gate shouldn't have happened, but it seems as though politics keeps on getting dirtier and dirtier. And to be honest, the NDP aren't innocent lambs in the process. The NDP have dirted their hands on a number of occasions with Ralph Goodale, James Moore, David Oliver, and now Gerard Kennedy.

Out of all the parties, The Greens hit above the belt, although it probably won't be long before they decide to muddy things up.

sharonapple88 said...
This comment has been removed by the author.
11:44 AM

I'm pretty pissed of the way Peggy Nash has gone on the attack on Gerard Kennedy. Things like this -- trying to make him out to be a bum by twisting his record -- are more likely to move the electorate than a story from 1996.

I don't really see how this would work to Jack Layton's benefit. It is going to hit him with female voters, especially if the story gets more widely reported in the coming days.

But this is entirely unfair to him. It isn't for police to leak this information, and yet it happened. This is a serious invasion of Layton's privacy by the police. The police were in unique possession of this info, and were the only people with the unique powers to aquire it.

It is bad enough for this kind of story to leak out about Joe-Blow. But its infinitely worse when the police think it is their business to do this knowingly trying to influence elections.

It is going to hit him with female voters, especially if the story gets more widely reported in the coming days.

But it might get him the male vote. :P

I kid, but I think the story's going to get him more sympathy than anything else.