Reality Stomps On Tory Good News Story Of The Day! 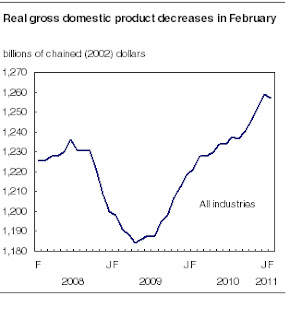 Real gross domestic product decreased 0.2% in February following a 0.5% increase in January. Manufacturing and, to a lesser extent, wholesale trade were the main sources of the decline. The decrease in manufacturing resulted in a 0.6% decline in goods-producing industries.
Actually, one months data doesn't mean much, but nevertheless every piece economic good news in the hands of a party that's running on its economic record  is a weapon.  Instead, the last weekend before election 41 Stephen Harper just got handed the equivalent of a bag full of crap.
Interesting too, that growth going forward is expected to be pretty sub-standard, all based on high-gas prices and a lousy U.S. housing market.  If I were Jack Layton, I might want to let the Tories bleed a little before dropping them and forming the Layton/Rae coalition.
Or perhaps, because he says he's going to run for something, the Layton/Kinsella coalition.

Posted by bigcitylib at 9:05 AM

Flaherty is being rolled out to argue that this means we shouldn't be switching horses.

I think we should be changing generals.

I don't agree We should wait longer than a Speech from the Throne to ditch the Conservatives -- assuming the seat counts are favourable, of course.

Ditch them, get into government, audit like crazy, reveal every fake Flaherty economic projection, and make lots of ongoing noise about the mess found so people understand how fortunate the Conservatives were turfed.

Let's try that again "We should wait *NO* longer than a Speech from the Throne to ditch the Conservatives -- assuming the seat counts are favourable, of course."

I agree with Mark Francis. NDP+LPC need to get in government as quick as possible and open up the books, because with Flaherty we in Ontario know from the past that it's going to be full of horror stories.

Likewise - full public inquires on the Afghan Detainee Issue and the Carson Affair. Harper & his cronies need to pay for all they've done to this country.

I'm in agreement with Mark & TofKW, we should not wait - I think we are going to find all the CRAP of the previous govt, and before they can try to "shred it".

An article on the interesting on what might happen after the election.