You know, you get emails sometimes.  And late today I got one with this attached: 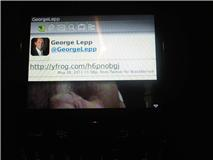 ...purporting to show the penis of PCPO candidate for Niagara-on-the-Lake George Lepp.  I thought, yeah right.  Considering the proximity to this incident, which also involved twitter and yfrog, I figured that at most people might have figured out how to hack these social networking services and post naughty pictures from the accounts of political candidates.

But tonight I see this:
Rookie PC candidate George Lepp says he’s embarrassed that a photo of his family jewels was posted on his campaign twitter account for about 20 minutes before it was quickly unzipped.
Alan Sakach, communications director for the Ontario Conservatives, said the photo was inadvertently taken by Lepp’s BlackBerry when it was in his front pocket. The photo was posted after someone took it from the candidate for the riding of Niagara Falls, according to Sakach.

I don't want to spend too much time on the likeliness of Mr. Lepp's account.  I would just point out that, however strange it might seem, the alternative is considerably worse.  Back in my day, the best "fun" you could have at Conservative conventions was when they buried the live chickens in sand, and everyone got drunk on rot-gut and tried to shoot their heads off.  If Mr. Lepp is not being honest here, then believe it or not the Tories have learned how to throw a better party.

Posted by bigcitylib at 8:54 PM

I call complete bullshit on that story, unless his bberry has the x-ray vision app.

Hole in his pocke...t and no underwear

I once made a butt call to 911. Thankfully, the operator did not comment on my tushie.

Actually, now they're saying he was pickpocketed on Saturday, so he has nothing to do with any of it. Methinks the man protests too much...lol

We mensusa offer discount and free shipping in all $99 above all kinds of suit like Mens Suits,formal wear,slacks,trousers even shoes and many more,you can contact us at 1888-7848872