I'm thinking I might give the old political consultant business a try, figuring that if LaForet can pull it off how hard can it be?  So I've had several buttons made up as a kind of "proof of concept", and if these are successful, more will follow.  The two buttons are shown below, accompanied by some notes as to the thinking that went into them, and a few ideas for future projects: 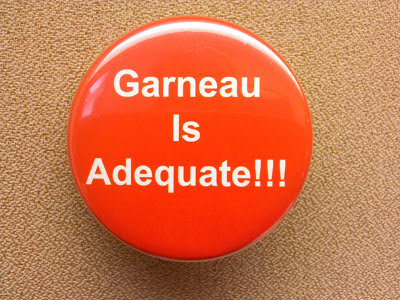 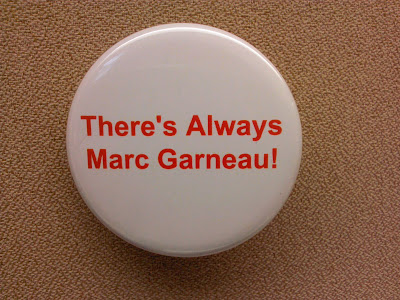 So, one closely guarded trade secret among us consultant types is that excitement can be added to pretty much any political talking point just by using exclamation marks.  Note the three exclamation marks  I have employed in the very exciting button #1.  The same principle can be imagined in extremis by means of the following example: say we are running a candidate for some office who is young and charismatic.  We might create a pin for this candidate with lettering that read simply:

But--and this is where the real excitement would get added--every letter of the text, including the exclamation point...would be composed of tiny little exclamation points!  As though to say that this guy is made of excitement...is so full of the stuff that he might just go off any second.

Obviously, attempting such an approach with Marc Garneau would strain credulity.  These are only tin buttons we're talking about, not some kind of magical ring.  And indeed, my Button #2 dials back the number of exclamation points to evoke a quieter, more contemplative mood.  A thinking man's button, as it were.

In any case, if these two items sell big, I have plans for several additional Garneau campaign pins ready to implement.  For example:

Marc Garneau: He Is THE OTHER ONE

Garneau: He'll Put His Finger On It, Not Stick His Foot In It

...but I'm afraid this latter message is a bit long and might have to be stretched across two buttons, which would drive up my production costs.

Furthermore, my so far unnamed consulting business (and, by the way, if anyone wants to help with that, let 'er rip in the comments) won't just be about buttons.  I will also be offering more traditional political advise, ranging from don't insult Alberta because they're a bunch of vindictive pricks all the way to when speechifying in a restaurant/banquet-hall setting, do NOT quench your thirst from from the finger bowl.  (Technically, you can--its just a bit soapy, is all--but people find it gauche.)

My advice may not be the absolute best you can find out there, but it will be cheap and the portions, as it were, will be ample.

So I'm just going to sit back and let my buttons go viral.  You may place orders in the comments.

Posted by bigcitylib at 5:42 AM

I would like one of each please! Let me know how to connect.