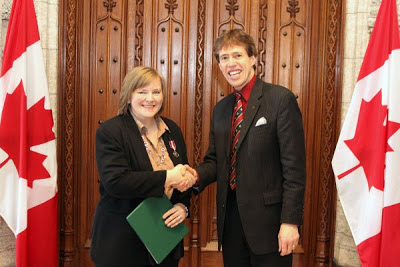 Just a few highlights from Connie's freedom fighting career.  Here she is suggesting that gay men like to walk around naked.  Here is where she received a reward similar to the DJM from Doug Christie; one of the folks in the audience that evening was a neo-nazi, later gunned down by cops.  Here is Edward Kennedy, an old friend of Tory MPP Randy Hillier and one of the FreeD regulars.  Here he is issuing what might be described as a death threat.  That one was against Warren Kinsella; I've had a few similar ones directed at me.  As a result Ed has, just let us say, met with the authorities on several occasions.    Still, Tim Hudak  has given him some love.  Here is another FreeD participant trashing Muslims.  Proud to say I got him booted off Tory MP potential Elie Salibi's campaign in 2008.

And so on.  The number of far right kooks that Connie and FreeD have nutured over the years is really quite high.  That Mr. Vellacott would choose to honor her and her enterprise is frankly appalling.  If the Queen heard about it she would puke.

Posted by bigcitylib at 8:30 PM

Vellacott needs to focus on the fight against fetus bullying.

For god sakes a couple of old guys who like to run around naked does not represent anyone. That's the stupidest thing I've heard. I don't like those guys running around naked, as most do around them. But you can't extrapolate that to entire group. If it were blacks or Jews it would be unacceptable.

Connie isn't NEARLY as big a nut job as Vallacott.

You and I certainly have a different idea of who qualifies as "hot". I've been thinking that since you said the same about Brigitte DePape. Really? Different strokes I guess.

Not Cool,So So So Not Cool. Whatever Happened to Human Rights.
"gay men