Off To OLP Convention Today

I think about eight bloggers were chosen to cover the event.  Of the group, Pupatello supporter Lisa Kirbie will offer spirited partisanship; Imp (who I think leans Wynne) and Jim  will offer careful analysis.  And I of course will be doing hair: who among the candidates has the best hair, and whose hair holds up over the course of the long, hard weekend, because this will provide a helpful indicator as to how the candidates might fare during the heat of a real election campaign.

The convention scheduling strikes me as being a bit weird, with nothing much on the first day and then everyone's pitch speeches crammed into a couple of hours on the morning of day two.  I will probably be out on the floor more on the second day.  At the NDP gig most of the voting had been done weeks in advance, and it turned out there were all of about 1,600 votes available on the floor to be haggled over (as well as 6,000 on-line).  Here, on the other hand, with an old fashioned delegated convention, there will be actual horse trading and negotiatin' going on!  More fun to cover, and maybe somebody will offer me a cabinet post by accident. 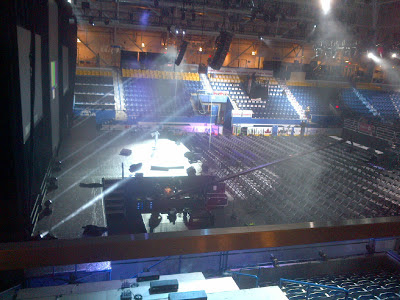 We are allowed to have guests, though I'm told the quarters are a bit cramped.  A fair bit of this will probably happen over twitter, and I rigged up an account here.  The hashtag is apparently going to be #OLPLDR.

If anything else happens during the day, I will try and do write-ups.  There's plenty of dead time at these things.  I just hope they don't wheel-out some old white guy to rap.