Archaic and undemocratic as these delegated convention things are (and may they be gone forever after last night), the Ontario Liberal Party Leadership Convention of January 2013 turned out to be a wildly entertaining ride and, at least for we bloggers in attendance, one helluva good party.

Of course, things didn't go according to the conventional narrative--ie a Sandra Pupatello victory--and that it would not was already becoming apparent after the first ballot, when the vote counts showed Sandra only a fraction of a percentage point ahead of eventual winner Kathleen Wynne.  People soon realized that Gerard Kennedy would prove to be the Queenmaker, and began to wonder where he would take his votes when the time came?  And the answer should have been obvious.  Kathleen and Gerard have known each other for years.  In fact,  I remember Kathleen introducing Gerard Kennedy at Citizens For Local Democracy meetings way back in the day.

Now, as they say, the real work begins.  Kathleen Wynne has a big job ahead selling herself to rural Ontario.  I'm not 100% sure she can do it successfully, and the some of the gestures she has made in that direction are, let us just say, not to my liking.  However, I think she may have more time than people think to make this sale; I am not convinced that the opposition parties will, push comes to shove,  trigger a Spring election.  The NDP is still in debt from last go-round; Tim Hudak is looking at polls showing him behind the NDP.

But whatever, at the end of the day all I really want from the new OLP is the email/cell number of their research guy and whoever they have running their war room. I will be glad to stomp Tories in Kathleen's  name.

PS.  Every leadership convention has its low moments.  Here is a shot of me the moment I realized that my guy was never going to be Premier. 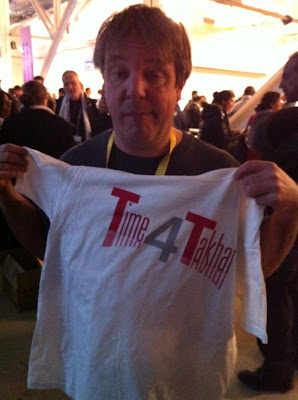 PS. Every leadership convention has its low moments. Here is a shot of me the moment I realized that my guy was never going to be Premier.

Well, at least you got a t-shirt out of it.

Actually, Team Takhar was pretty nice to us at Bloggers Central. They delivered free scarfs as well as free subs to our table.

God I love that picture. You're welcome.

From being puffy with Benmergui to this shot you like you aged a decade. Fuck political conventions, they appear too hard the constitution!

I should acknowledge that Nancy took that picture. They only reason I didn't do this earlier is I'm too lazy. Also, Nancy: you didn't come pubbing with us. I'm still bitter.

They can always google pubbing. ;)

Random thought - as surely as night follows day, someday we will use a different search engine or the whole concept may have changed in some way I can't fathom yet.

The question - how long will "google" as a verb last beyond the eventual demise of google the search engine? I know people who still talk about taping TV shows even though a perfectly good alternative (record) exists.