Randy Hillier, Then And Now

Tory MPP Randy Hillier has been taking some flack over on his Facebook page for condemning Idle No More  protests after having  having engaged in some highway blocking himself back in the day.  Here's his initial statement:

McGuinty states"In our democracy, we do not direct the police, that would be inappropriate" Either Dalton does not understand his responsibility or is purposely skirting it. The legislature directs police by passing laws and appointing judges and Police to enforce them. Here's my advice - any protest that unduly interferes with economic activity and harms or injures people or property, is no longer a protest but a criminal activity.

And you can see part of the exchange between him and one Andy LaPier below: 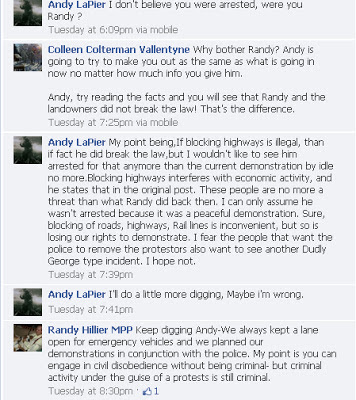 Well, here's the statement from the old "Rural Revolution" website:

Canada's busiest Highway 401 and the International Bridge  at Johnstown Ontario to the USA
were closed for 3 hours by 270 vehicles and 50 tractors in show of the demonstration of rural dissatisfaction.

Closing a bridge sounds a lot like "interfering" with economic activity to me.  And as to "keeping a lane open for emergency vehicles", I'm not sure that's relevant if its even true.  Here's a shot of the 401 that day from the same website: 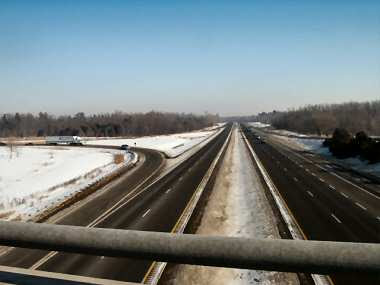 Looks pretty damned closed to me, and anyone travelling West would have had their "economic activity" pretty thoroughly interfered with.

Posted by bigcitylib at 3:45 PM