Lisa Thompson, Tory MPP for Huron-Bruce, introduced the  Ensuring Affordable Energy Act in the Legislative Assembly on Tuesday.  Its a private member's bill, but everything Thompson has said about it, for example her comments here, suggest that it is now the PCPO's de facto position on the matter.  From the assembly records:

The short title of this bill is the Ensuring Affordable Energy Act, and that’s exactly what this bill will do. This bill states that wind turbines will only be placed in willing host communities and municipalities will be given a full veto. Wind power must be affordable, meaning the cost per kilowatt hour must line up with other sources of generation. The costly Feed-in Tariff, or FIT, program will be eliminated. Municipalities will have the ability to decide whether or not they want to promote wind energy. The Niagara Escarpment and Oak Ridges moraine will be protected from wind turbines, and municipalities will receive their planning powers for renewable energy back.

What's important to note here is what is NOT in the bill: a moratorium on wind farms  (either permanent, or  until Health Canada reports back on the issue in 2014).  This is a 100 percent climb down from the word Hudak's MPPs were giving out not even three months ago.  Here, for example, is Lambton-Kent-Middlesex MPP Monte McNaughton on the topic:

…we realize that when we make the commitment, we’re not going to build them, if they’re not built. So scrap the 50,000 projects that are in the queue.  We realize that there is going to be a cost, our lawyers have told us that there are opt-out clauses and we sure as hell are going to pay those out because it’s going to be cheaper to pay them out than to honour contracts for 20 years. So we’ve been clear that we will not going ahead with however many projects are left, if we’re fortunate enough to form the next government after the next election. But clearly there will be a cost associated with that, but it will be cheaper to buy them out than to honour them for 20 years. 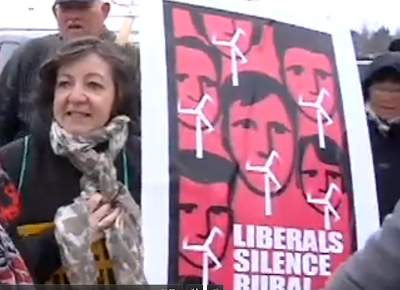 ...Tim Hudak may be finding them a little easier to ignore than in past.

Lisa Thompson's bill doesn't require the call for a moratorium. The elimination of the FIT program and the restoration of municipalities will stop wind developers in their tracks. Somewhat telling that that's all it would take isn't it.
Our calls for a moratorium while the health study is going on was a naive plea to the McGuinty / Wynne gov't to put the brakes on for awhile. Alas , money trumps all.
What's interesting is that as more installations go in and the continual cheap doublespeak from Kathleen Wynne, just cements the reality that the liberals may never win a seat in rural Ont. for the next 100 yrs.
So there's no flip-flop here. If you have any understanding of the prov gov't/ wind industry reality, this bill shuts down wind in Ont.
That picture you posted is a woman who was driven from her home and was prominent in the CBC doc. Windrush. I assume you saw it. Perhaps you might understand that for most of us, we aren't professional protesters like major unions. Most of us work for a living. That said, I'd like to invite you to our protest Apr.3 down in front of the Convention Centre which is hosting the FIT conference. I'll be there with my market canopy with info for the media and other interested parties. There I could also introduce you to those who've been driven from there homes and meet them face to face. I look forward to meeting you and I promise I'll have no Nazi-inspired signs.