When I was ready to leave for Toronto from my small, Left Coast hometown, it was pretty obvious that my old datsun pickup (the Yellow Chariot) wasn't ready for a trip over the Rocky Mountains. So I sold it for a $100 and took a plane out, which meant that I arrived in Toronto with no vehicle, and without the financial wherewithal to purchase a new one.

However, for someone who hailed from a town (Esquimaux) where the buses came twice a day, Toronto's public transit system was a complete eye-opener. There were so many buses that, if you found yourself sitting next to a guy talking loudly to Jesus, you could just get off at the next stop and wait for another one. And traveling by subway meant riding on a train! For the first couple of weeks, I was exploring the underground just for kicks.

In any case, the TTC allowed me to commit to a totally green, crunchy-granola lifestyle, at least when it came to getting from place to place.

About ten years ago, though, I met my wife, and found that it was not really possible to conduct a good date from the back of a street-car. Furthermore, when she moved in with me and I actually was forced to buy food, taking a cab back and forth from the local Dominion store seemed a bit excessive. So I finally broke down and bought the Cavalier I now own (The Green Can).

But I'm still committed to a car-free lifestyle, inasmuch as this is possible. For example, The Green Can is insured only for "pleasure" use, and I have managed to keep my annual mileage under 10,000 K for five years running. In fact, when I purchased The Green Can I hadn't driven in 15 years and was considered a new driver, so my insurance costs have actually gone down since that time! I run to work and back every day (through any weather but thunderstorms and minus 15 C cold), and I bus or walk on all trips but those for which the vehicle is absolutely necessary.

So, when I read here that oil is expected to hit $100 a barrel this summer, with a resultant spike in gas prices, I could not help but whip off my clothes and start doing my Superiority Dance. In fact I am doing it right now, Nekkid, in front of the computer! In fact I am doing my Jimi Hendrix act with the keyboard, typing behind my back as I shake my ass at the screen! Get a load of that, you Petro addicted pack of Pansies! Because I'm alright, Jack! I'll be spending my extra cash this summer on Latte's and trips to the Opera! You'll be standing cap-in-hand begging for coins outside the Shell station! God its wonderful! I've got the Liberal smirk going so hard it hurts...but in a good way!

Just had to get that off my chest.

PS. But BigCityLib, I hear people asking, what about our small town brothers and sisters, who don't have the benefit of an elaborate public transit system? Well, BigCityLib has the answer: 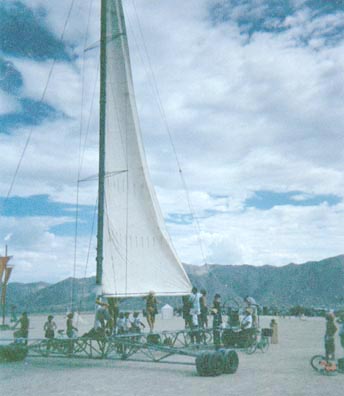 I hear these suckers are tippier than a Jeep Samurai, but eventually you learn how to lean!

BigCityLib, Nekkid and Sexxxy in The City, over and out!

Posted by bigcitylib at 8:02 AM

Well BCL, I have a couple of speculations for you. In the usual fashion, the price at the pump will mirror the price of oil within minutes when it goes up but will slowly meander back down at the end of summer and into autumn.

I just got a motorcycle and a job four blocks from my house so I'm with you as far as letting the rest of the suckas pay dearly, but I'm also preparing for a lengthy gouge session over the summer.

How true how true. And so the virtuous are dragged under by the acts of the less than virtuous.