They say you shouldn't speak ill of the dead, and with lawyer to the Canadian far-right Doug Christie having passed a couple of days now, most of the newspaper obituaries have already been written, so maybe these words are no longer worth saying.


But the obits I've read have been pretty mush-mouthed, a few downright fawning.  Most suggest that Christie defended his clients from some higher commitment to freedom of expression, and not because they were ideological fellow travelers.  It might be worth challenging this assumption.

To that end its  worth taking a read of Tom Hawthorn's against-the-grain Doug Christie: The Unauthorized Obituary.  Here is a particularly enlightening excerpt.  It describes the one occasion Hawthorn and Christie met in court:

My time on the stand was a farce. I was ordered to surrender a notebook, which was then entered into evidence. It was placed in a plastic bag like a dagger from a murder scene. At one point, Christie caused a fuss because the stated number of pages on the front of the notebook did not match the number of pages he counted in the notebook. He made allegations of perfidy until a lawyer for the other defendant pointed out the notebook had lines on both sides of the page.

We were nearing the conclusion of my testimony when Christie barked, "Are you a Jew?"

Hawthorn also discusses the several occasions where Christie  used the court system in an attempt to silence those who criticized the various Western separatist groups he founded or otherwise became involved in.  As with many free-speech proponents, Christie's commitment to unfettered expression was absolute right up until the moment it wasn't.

One of these separatist groups, incidentally, was the Western Canada Concept, which wiki describes as:

...a Western Canadian political party founded in 1980 to promote the separation of the provinces of Manitoba, Saskatchewan, Alberta and British Columbia and the Yukon and Northwest Territories from Canada in order to create a new nation.

Most of the pieces on Christie's career have said very little about the WCC, so it is worth noting some of its political positions beyond Western Separatism (or at least the positions of its B.C. branch, which Christie led for awhile).  Here's a newspaper ad he ran in the late 1990s: 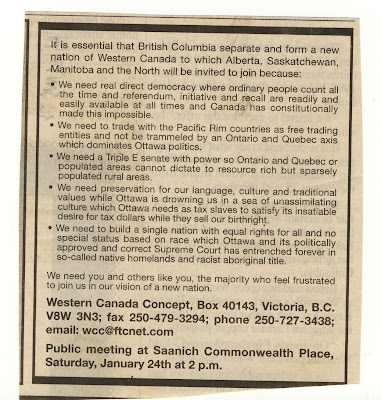 I'm not sure you would even say that points four and five are in "code"; they are, quite simply, race-baiting. And its worth pointing out that this ad dates to several years before 9/11.  So while the targets change,  the language never seems to.   Here's another passage from the " Western Separatist Papers": 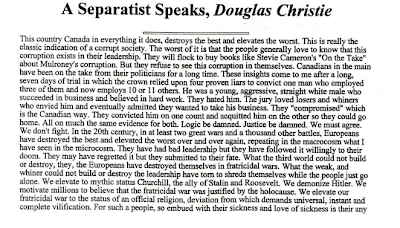 As you can see, according to Christie, history has given Adolf Hitler a bit of a raw deal.

In any case, and in conclusion,  for many years Christie ran his law office out of "Christy Towers" on 810 Courtney Street, Victoria B.C.  It's an odd little building, looking more like a toll-booth than a business.  That's a picture of it below: 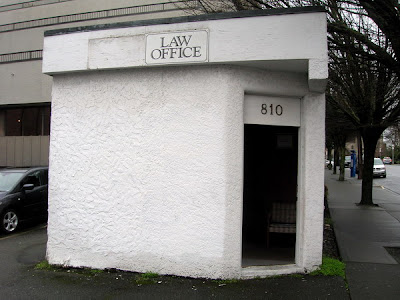 And, strangely enough, the building will continue in use after Christie's death.  Apparently, another lawyer works out of it these days, whose practice is quite different from Christie's, and who deserves none of the man's baggage going.

PS. I deleted the original of this by accident while weeding out unfinished drafts.  As you can see its been reconstructed but, unfortunately, the comments are gone for good.

Here are links to both parts of that Christie WCC Rant from his December 1994 Newsletter. As anyone can see, it looks like it could something out of Benito Mussolini's memoirs.

Note Christie's use of the word "holocause." With Christie, what you saw was what you got.

I got a belated piece up today. Yours is better.

Here it is from email (with a typo or two fixed):

I feel conflicted from a parochial point of view about the broad freedom of expression/hate speech issues raised in this era. When these laws first came into place it was argued by some that they were an undue restriction on freedom (fair argument) but also by some on the right, in bad faith, that these were laws written by Jews for Jews to prefer Jews, etc.

What's out there today though, in at least equal measure, is the argument by many on the left that isn't all that different-i.e., the argument seems to be made more and more that these laws are applied unevenly to protect Jews who, it is argued, are at the top of a so called "hierarchy of hatreds." It is further argued that these laws and threats are used to silence them.

But it seems to me that in the minds of these "critics," in order for Jews to be the beneficiaries of these laws this position almost seems to require that there be an imminent pogrom, whereas in the case of other groups hatred is permitted to be inferred.

In both cases my community was/is seen as being too well off, too privileged and as getting away with something. The only difference may be that in the former, Jews were seen as not white enough and in the latter as too white.

Since the strength of the far right haters seems to have dissipated it seems more plausible that the more real enemies of my community today aren't who they were 30 years ago.

And right on schedule, those loveable & ever fulminating bumpkins @ freedo are pissed because their late and not completely lamented hero's own published rants are made public once again. Rather the opposite of censorship one should think.

Let him rot in hell.

I'm like to point out here that there is an excellent warts-and-all detailed recounting of Doug Christie's history here on the Canadian Antiracist Blogspot in several parts and more coming.

Yes, he shared the views of his most notorious clients, and yes, his so-called "free speech" advocacy was a complete sham.