At the risk of giving (a weee bit more) publicity where it isn't deserved, in the last couple of days the entire Ottawa press gallery has received "a brown envelope", stuffed with

...a colour reproduction of a critical, four-year-old Ignatieff profile in the British publication New Humanist – complete with particularly damning paragraphs highlighted in yellow...

...and sent from a U.K. address. The article castigates Iggy for his “[his shared] vision of the US government’s vision of the violent and compulsory promotion of democracy."

And people are wondering who is responsible. The inestimable Kadey O'Malley reasons as follows:

As for who might behind it, although she maintains that Republicans for Ignatieff is almost certainly the product of one of Ignatieff’s leftwardly-leaning critics, this seems far more likely to be a bit of mischief making from the other side of the political spectrum

What can she say — it just feels like a Tory trick to her, whereas R4I has a different style.

Well, I think its a pretty that if this is a Tory trick, so is R4I. For example, here's a screen shot of the google cache of Reps for Iggy, showing the stunt its creators were on about last week: 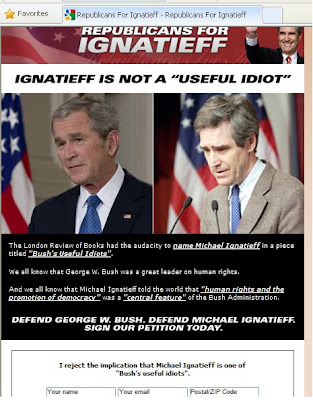 Note the reference to U.K publications, and note the similar "promotion of democracy" theme. Since this particular attempt got zero in the way of media attention, I would suggest we are seeing an attempt at a "do over" by The Würstlin Group, who the Tories have hired to do their on-line campaign.

I particularily found Roblaw's comments from the previous article funny. Like the conservatives would even consider this stooping low.

It wouldnt surprise me if the Canadian version of Duffman started heckling Ignatieff at public appearances.

What I see is an extremely valid point, namely, the incredible cognitive dissonance between Michael Ignatieff's writings, which, one would assume were made with significant forethought, and subsequent editing before publication - and what he is now saying as he seeks a mandate from the Canadian public.

My blog has gone on record to state serious complaints over what I see as errors of our Conservative government.. yet, Liberal bloggers and the media in particular seem very disinterested in the idea of how Michael explains the differences between Michael the academic and Michael the politician.

RfI is somewhat amusing, is perhaps somewhat juvenile, but at the same time makes a very legitimate point. "Coercive interrogation techniques". Those are Michael's words. Are they devoid of meaning? As Irwin Cotler demands repatriation of Omar Khadr (after doing nothing for him when he was a Minister in power), do we have a right, and perhaps an obligation, to say to Michael, 'what exactly did you mean when you advocated "coercive interrogation techniques?"

Haroon Siddiqui,the Star's editorial page editor emeritus, made just such a demand.. as he wrote on April 30, 2009, "Ignatieff's rationale was about the same as Bush's: extracting information from detainees to prevent "the greater evil" of terrorist attacks.

For that – and for advocating indefinite detention of suspects, targeted assassinations and pre-emptive wars – Ignatieff was seen as one of the intellectual enablers of Bush's war on terror.

That he was then the director of the Center for Human Rights at Harvard University gave added weight to his words.

Given the current rethinking in the U.S., has Ignatieff had reason to rethink his own position?

Canadians are entitled to know."

I guess he was "stooping low".

yet, Liberal bloggers and the media in particular seem very disinterested in the idea of how Michael explains the differences between Michael the academic and Michael the politician.

These discussions have gone on for years, Rob. It's no else's fault if the information you expose yourself to doesn't address these issues. Maybe you should read more widely?

It's not the responsibility of Liberals to furnish answers to Conservatives every time they demand them.

By the way, I notice our die-hard Iggynaut Ted Betts seems to vanish whenever these topics arise. I guess he thinks addressing this stuff is grunt work and not the responsibility of turbo-charged corporate lawyers.

I love when the author of a book entitled The Lesser Evil, is characterized as a cognitive dissonant.

The Lesser Evil. Get it?


Of course you do. But read the book first.

At least Iggy took the moral risk of writing about the issue in the first place. What has Chunker Steve contributed to the discourse - mandating civil servants rewrite foreign policy on the sly?

The only moral obligation Rob has is to ask the Prime Minister of Canada, the one he supports, why he has stonewalled on Khadr's repatriation.

Rob knows that, of course. But he's hoping this focus on Ignatieff's statements before he was a Canadian politician, before he was even Liberal leader, will distract the rest of us.

The unending ethical corruption and bad faith on the part of Conservatives is what never stops repulsing me, no matter what they do.

I heard the guy who wrote the article that was sent in the brown article from BBC actually still works for the BBC.
Is there some chance that Mr. Ignatieff left behind a few disgruntled coworkers in London?
And that the guy who wrote the negative article really is concerned about having Ignatieff in any kind of leadership position considering his former positions on torture.?
That would be the obvious first place to look for who sent it.

has already been done and BBC denied. See Kadey's article.

Hmmm.....a girlfriend's daughter is studying psychiatry and says or believes that articles negative to Ignatieff by other journalists/writers appear to be "envy/jealous" critiques because he was so successful.

Just her opinion, but I thought it interesting.

I know BBC, the corporation , denied sending the article. But can they speak for every single employee?
If YOU sent something in the mail from where you work that was not sanctioned by your company the company of course would deny that THEY sent it - but how could they know whether or not an employee did.
Seems pretty obvious to me. It is well known that Ignatieff made a lot of enemies over his support of Pres. Bush's war on Iraq. It is also well known that he lost his job at the BBC several years before that because viewers were not tuning in to him and that his new wife was his publicist there and she "repackaged" him, promoted his new books, changed his image and he relaunched himself in the United States.
There is no down side for Ignatieff to just face the reality of his past musings - more problems arise when he tries to deny them.
If he can be pushed around with a little bad press you can bet every special interest group will see him as easy pickings.

I very much doubt a journalist would send a snail-mail copy of a two year old article to the Canadian media if he had a grudge to pursue against Iggy. Why not just write something fresh? Not like he doesn't have a big enough audience if he's with the Beeb.

There is no down side for Ignatieff to just face the reality of his past musings - more problems arise when he tries to deny them.

He never denies them. He explains them. And that's when more problems arise.

What the Liberals should be doing is pointing out that Stephen Harper supported the exact same things without bothering to argue them very carefully, without having the background expertise to advance a credible argument (and Ignatieff wasn't the only Messianic Liberal to advance these arguments at the time), did so while he was in the Canadian Parliament and that the Liberals saved Canadians from being disgraced by him. Then again, most people and especially "Conservatives" don't have the patience to entertain a thought that takes more than 20 seconds to articulate and that requires a memory going back farther in time than last week, so it's probably pointless, all 'round.

Morgan, If the person admitted to sending such a package from a BBC address they would be sacked. Unlike Harper they fire fuckups. I worked there during 1998-99. I saw people get sacked for less.

Thanks for the laugh. I passed it on to some other coworkers.