Did Dykstra disrespect our soldiers, or was he just live-blogging the event? And if you are live-blog a veteran's day ceremony, isn't that in itself disrespecting our soldiers?

Interesting as to when Dykstra's origonal blog post (which contains the picture he allegedly took with his blackberry) was written. He claims 11:38 AM on Remembrance Day, but Jane Taber writes:

Update The Liberals are disputing Mr. Dykstra’s version of events, pointing to an RSS feed that suggests the item was posted this morning at 11:06 a.m. - after the photo went out - and not on Remembrance Day at 11:38 a.m.

Here's a screen shot of the front page of his blog, retrieved from google cache: 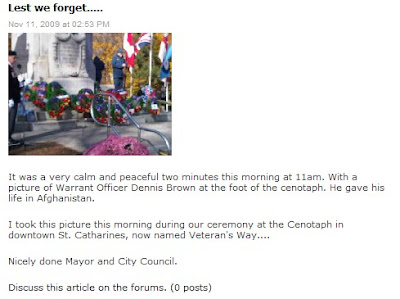 Don't know how easy it is to see, but the time-stamp here reads 2:53 PM. Meanwhile, the most recent version of the page bears a time-stamp of 11:38 AM. Note also that the wording of the post suggests it was written yesterday afternoon. So it looks as though both sides are wrong, although it also looks like Mr. Dyskstra diddled with the timestamps on his RSS feed and blog for some reason or another. I demand his immediate resignation.

Don't know if that helps solve much, but I do love a mystery.

Posted by bigcitylib at 1:25 PM

Jumpin' Jesus, it's not Michael Jackson's funeral! What possible need could there be for a live-blog of a remembrance day ceremony?

If you want scandal, you should see the latest issue of my daily ten-percenter. The Conservatives are openly accusing Liberals of anti-semitism.

I'm being sent hate-mail, to my home, at my expense.

Alright - in Defence. While Dykstra was apparently "live blogging" and taking a picture for his blog - who was taking HIS picture. And then using it to make political points.

Dykstra shares his thoughts about the moment - and HE is being disrepsectful, but some clown is taking pictures of Dykstra and then running to the 'net to make hay and THAT is a worthy show of respect for the event?

Now - from the OTHER side. I'm so sick of politicians from every party jumping on the Twitter bandwagon and being pre-occupied with "connecting" with their constituents. I would prefer they pay a little more attention to the moment at hand - and that includes Dykstra at the memorial.

While Dykstra was apparently "live blogging" and taking a picture for his blog - who was taking HIS picture.

Don't you Conservatives ever make distinctions between elected officials and everyone else?

Let's try something completely different.. uh, TiGuy.. I've come to the realization that I've been completely misguided in voting Conservative.

"While Dykstra was apparently "live blogging"... "

Can you read? That's not apparent at all.
Its a lot more apparent that Dykstra is pig who's lying that he was "live blogging" because he got caught playing with his Blackberry during the ceremony.

Let's try something completely different.. uh, TiGuy.. I've come to the realization that I've been completely misguided in voting Conservative.

I don't care. Never have.

Conservatives have never told me anything useful or interesting in my entire life. They have demonstrated many useful things, however. None flattering.

Disrespecting Canadian soldiers?
Liberals are only upset because they think someone is muscling in on their territory.

I'm being sent hate-mail, to my home, at my expense. - Ti

As you giveth, so shall you receiveth.

Oh. You care TG.. you most certainly care. It's almost touching actually.

I don't. The only reason it looks like I do is because you Conservatives are in my face all the time (that is, when you're not saying mean things behind my back), with your constant trolling/dialogue in bad faith.

If you voted Liberal...in Alberta...do you think it would matter to me?

I care about all the lying Conservatives do, but given the nature of our culture, there's not bloody much I can do about that.

As you giveth, so shall you receiveth.

What are you talking about, troll? That flyer Carolyn Bennett sent out? That one flyer?

If you were my neighbour, I'd come over to your house and shove the over 200 ten-percenters I've received, in the last three years, almost every one a hateful attack, in your smug, Albertatarded face.

Ti-Guy really loves us conservatives deep down, I can feel the love.

Is see Bocanut. It's WK's fault Rick Dykstra is an absolute asshole.