People Said I Was CRAZY

...when I suggested that Stephen Harper might have lip-synched his performance of The Beatles "A Little Help From My Friends" at an Ottawa arts gala back in October. But now we find that this picture--passed off as a live action shot taken during the gala--was

...taken by a PMO photographer hours earlier during a private rehearsal.

Not only that, I've performed a photo analysis of this picture 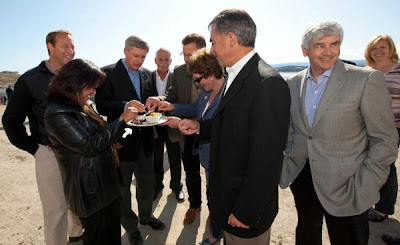 ...which purports to show the PM and his cabinet eating seal meat. But if you magnify the relevant portion of the object they're all holding (note white arrow), you get this:

...which to me looks suspiciously like a plate of smarties.

You can't trust these people with anything.

Posted by bigcitylib at 8:38 AM

There appears to be a bowl on the plate. That's for the seal meat or some dip maybe. Yes you are CRAZY.

or what remains of FrankD's brain

They are sacred coloured beads used in ancient native rituals to ward off indigestion from eating too much seal meat.

Man, you get early up early to get your trolling in, eh Frank?

Anyway, "Die, media, die," etc. etc. It's getting what it deserves when the PMO manipulates it like this and readers stop paying for the rags.

MacLean's photo spread of the PM's Tiny Tory Tot Talent performance at the NAC gala in its print issue consisted entirely of images from the PM's royal photographer.

I don't know, I think the media is getting a bit annoyed at this point. Has everyone read this scrum:
http://www.cbc.ca/politics/insidepolitics/2009/11/scrum-theatre-who-wants-to-know-what-peter-van-loan-finds-interesting-about-the-firearms-commissione.html

Seems like the CPC is getting a bit too comfortable. Duffy gassing off on tv, the scrum above, the over-the-top action plan advertising (that hasn't actually stopped), heckling people about H1N1 in the House, their generally absurd actions in the House. The list goes on and on. Harper needs to get the team back in the playpen.

How do we know it's seal meat and not flesh rendered from human infants?

If it was flesh rendered from human infants Harper wouldn't be sharing it.

Tough being a Liberal these days eh ?

Come on BCL, you blog used to be at least entertaining in a narrow minded bigoted Liberal way.

Now it seems with Iggy/Iffy screwing up and the polls turning down, you are just putting up boring drivel.

Even tiguy's comments, quips and come-backs are more insane and less entertaining than ever.

If it was flesh rendered from human infants Harper wouldn't be sharing it.

Actually, he put the seal meat in his pocket. Wafergate II, dudes!

I reckon he's savin' the wafer and the seal meat fer later on in case he starts feelin' a bit peckish.

Gosh, Fred doesn't have much of a sense of humour does he?

Sad to be so angry all the time.

Consistency is important for credibility.

A) When it hits the fan, MI goes AWOL.

B) Looks like the LPOC brigade loyal to MI is "resizing".

C) When did shuffling deck chairs on the Titanic become routine for the LPOC?

Hundreds of comments, all disjointed, repetitious and in the same confrontational tone.

yeah she'd be a great way to clear out a party. Had enough of guests over? give Canadiansense a microphone.

I couldn't imagine going through life being that bitter. Her ex must look like Ignatieff.

"you blog used to be at least entertaining in a narrow minded bigoted Liberal way. "

Hey, Fred...change your t-shirt, spritz on a little Brut, lick your comb and run it through it through your hair. She's available!

Maybe that what these trolls need...a matchmaker.

Ti-Guy, I bet that Fred uses an oilsands worth of Brylcream on that rug of his.

Thems M&M's that had the emmmms rubbed off after they were smuggled, overland, into Canuckistan by Frank Luntz who bought 'em with Ian Brodie's platinum-plated American Express card at the Quickstop in Wasilla....

Or some such thing