The APS Petition: Portrait Of The Denier As An Old Man

Mashey's Science Bypass is a close analysis of the demographics and interlocking social networks of the men (and occasional woman) behind the APS (American Physical Society) petition, a recent attempt by a tiny sub-set of APS Members to have the Society revise its official policy statement on climate change to suggest that the basic science behind AGW is still in question. In examining the machinations behind this one effort, Mashey uncovers several interesting truths re the denialist movement in general.

Here are some of the highlights from his report.

The APS document serves as a fairly typical example of an anti-AGW petition. Usually, these originate in a free-market "think tank" like The Cato Institute (or in this case most likely The Heartland Institute) and serve a political rather than scientific purpose; specifically, serve to

...create impressive lists of names to help maintain an illusion of serious scientific disagreement for the public.

The chart below provides a quick history of the various petitions, events, and miscellaneous actions used to challenge arguments for (and more importantly, prevent action on) climate change. The red diamonds count as well-known, often long running petitions; the red squares are events like the Heartland Conference in NYC: 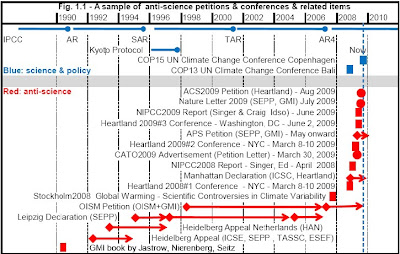 What becomes obvious from this chart is that these kinds of petitions, and other forms of denialist activity, tend to spike "whenever the US Government might actually do something meaningful" on the issue. So the first petitions (Leipzig Declaration, OISM) appear between the founding of the IPCC and the signing of the Kyoto accord, and within the past year or so there has been a frenzy of activity, designed to score political points in the lead-up to Copenhagen and in advance of action on Waxman-Markey in the U.S. House and Senate.

In contrast, official IPCC reports (shown as blue circles) proceed on a schedule relatively unconnected to events in the political landscape.

The next chart, comparing the demographic profile of signatories to the APS petition vs APS members as a whole, reveals the denialist movment's dirtiest little secret.

Of the APS petition signers, 86% were born before 1950, as compare to mere 40% of the APS membership as a whole. I've touched on this point before--and of course it is always possible that good scientific work can be done late in life--but the fact is that the denialist movement is basically filled with old men who have either retired or are at the very end of their careers, and in almost all cases these careers were in fields well distant from anything related to climate science. To suppose that APS signatories have a relevant contribution to make to the AGW debate is akin to imagining that Wayne Gretzky could have hung up his hockey skates circa 1997 and become a successful NFL linebacker. Not impossible, in other words but highly unlikely.

Finally, Mashey was able to track the political donations of 47 of the petition's American signers. His result

...shows a strong skew towards the Republican Party and Republican Presidential candidates (McCain or Bush).

Unfortunately, it was not possible to replicate this table for the small contingent of Canadians on the APS petition. However, given the connections between the Canada-based Friends Of Science (who have their produced their own petitions/open letters and etc.) and the Conservative Party of Canada via, among others, Conservative activist Barry Cooper, one would suspect a similar tilt towards the right side of the political spectrum among Canadian deniers.

And, oh yes, in November of this year the American Physical Society overwhelmingly rejected the petition's proposal to replace the Society's 2007 Statement on Climate Change with a version that raised doubts about global warming.

Interesting information BCL. Yet nowhere does it touch on the fact that the Democrats now control all levels of government in the US and concrete action on AGW appears as dead as ever.

It may be that it is not the denialists that are the real concern. Instead, the duplicity of those who claim to support action on AGW may well be the real issue and one that is overdue for a study of its' own.

Start with the Democrats possibly?

Tell you what Paul - why don't you tell me what the Ontario Court of appeal did wrong. Please reference the decision and provide sources for your points of law.

Also, you still haven't explained why there are two different Blogger accounts associated with the name "Paul S." commenting here.

Ti, I already answered Gayle on the previous blog. To sum up very quickly, I believed the Ontario Court of Appeal's decisions to be poorly reasoned with only a loose adherence to our legal traditions and activist in that it demanded centuries of common law overturned as soon as the decision was announced. The Court had activist fever.

As for two blogger accounts, I answered that question too already. Do you not read?

I switched my e-mail accounts sometime last year. I don't record the minutae of my daily life, possibly I inadvertently created a second account, I don't know. Why does it matter?

I believed the Ontario Court of Appeal's decisions to be poorly reasoned with only a loose adherence to our legal traditions and activist in that it demanded centuries of common law overturned as soon as the decision was announced. The Court had activist fever.

Don't you ever worry that your grandiosity and self-regard is a little pathological? On what basis do you believe you are in any position to judge legal arguments or even understand "centuries of common law?"

I don't know what you think you're doing here exactly, but I get the feeling you get off irritating people. That's pretty sick, you know.

I don't record the minutae of my daily life, possibly I inadvertently created a second account, I don't know.

Do you claim responsibility for the comments written under the other account?

Thanks for the kind words.

As I said on p.14, conservative politics *need* not lead to rejection of climate science's results, and gave a few examples of people whose politics lean conservative, but certainly accept the science and the need to take action.

I'm afraid that in many US states, the moderate/liberal side of the Republican party seems to be a vanishing species, sad to say.

Still waiting for an answer to this, Paulie:

Do you claim responsibility for the comments written under the other account?

If the comments are mine of course I accept responsibility for them.

I don't know what you think you're doing here exactly, but I get the feeling you get off irritating people. That's pretty sick, you know. -Ti

This coming from an anonymous poster who can barely argue a point and spews vile slurs instead?

You must live a sheltered life if variances in opinion are offensive to you.

This coming from an anonymous poster who can barely argue a point and spews vile slurs instead?

Only at fucking trolls like you. Someone's gotta do it.

You must live a sheltered life if variances in opinion are offensive to you.

Why the hangup over my Blogger accounts Ti? I answered the question you asked three times so something must be bothering you, no?

That's it Ti?? Here I thought you would be offering up something original. Why are you wasting both of ours' time?

Reckon he's gonna have to revise the graphic to include "Release of the hacked Hadley CRU documents".

Reise the graph:
probably not for this paper, but it may well go on the list for something later.